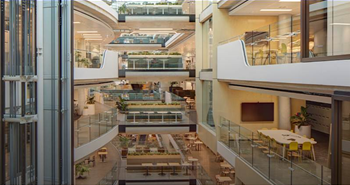 If you and your employer have recently moved workspaces to a schmick new tech-enabled, flexible and activity-based office but the desks and places you use a computer seem, well, a fair bit smaller, it’s probably because they are.

As Australia’s biggest tech employers like the Commonwealth Bank and vendors ranging from Atlassian to Salesforce all dump their legacy office leases to snap-up agile and tech friendly new office builds, developer Mirvac has revealed the phenomenon of the incredible shrinking desk.

New designer office spaces located within a bustling mixed commercial and residential area, preferably inner city or on the hipster fringe, are a proven lure for attracting switched-on, digitally literate staff that banks and digitising corporates are desperate for.

But don’t be fooled by cavernous open spaces, muted organic tones and comfy break-out areas and flexible meeting and gathering areas – the amount of personal space today’s average tech worker has is falling and falling fast.

That means people now work in a third of the space they once used to, and there are plenty of new Mirvac office developments coming down its new build and repurposing pipeline.

Mirvac says it will have around $6.1 billion in new office assets created or being created in the decade between FY12 and FY22, with major builds like the Commonwealth Bank’s tech hub at South Everleigh already well known to readers of iTnews.

The demand for hip new agile-friendly digs, which Mirvac is marketing as “modern smart buildings that work with disruptive technology” is so hot that the usually civil and collaborative relationships between banks and software companies descends into public brawling.

That move is part of a wider plan by the NSW state government to not only recycle property assets into economic growth, but revamp the CBD and once predominantly industrial city fringe into mixed residential and commercial precincts where people want to both live and work.

So far it’s been tech companies and banks flocking to new builds, with Salesforce taking out the naming rights to Sydney’s tallest tower that’s being built by LendLease, the main developer of Barangaroo where banks like Westpac and other tech firms have also flocked to.

IBM recently took out new city digs at the north end of the Sydney CBD to be closer to clients as well as a blossoming fintech precinct around Wynyard promoted by the state government.

Big Blue’s staff at its St Leonards HQ are understood not to be such huge fans of Mirvac.

The once marquee site recently lost its sweeping water views to the southwest courtesy of a new Mirvac build dubbed St Leonard’s Square that has shot up in front of the Pacific Highway site ahead of the Sydney Metro station being completed a few hundred metres away.

The good news for IBMers, Mastercard staff and the few tech firms still hanging onto comparatively cheap leases in the former St Leonards tech ghetto is that the Mirvac development will bring a new food quarter – expanding local lunch choices between Maccas, Subway or Domino’s.