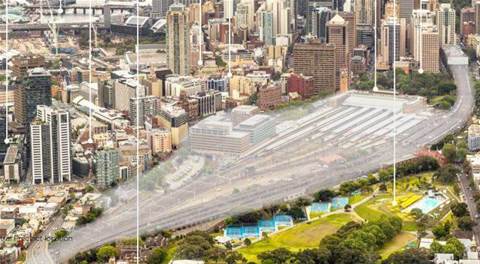 The NSW government has revealed early development plans for Sydney’s innovation and technology precinct that propose reclaiming land over rail tracks between Central and Eveleigh.

The Department of Planning, Industry and Environment this week began the public exhibition process on its ambitious vision for the 24 hectare area, which has been dubbed the Central Precinct.

The Central to Eveleigh rail corridor was identified as the “ideal location” for the government’s innovation and technology precinct by the taskforce appointed to lead its design earlier this year.

The precinct spans Central Station and the Sydney Rail Yards, which are considered a significant physical barrier between hipster heartland Surry Hills and Haymarket, Ultimo and Chippendale.

But immediate plans will focus on a number of buildings on the western edge of the station around Henry Deane Plaza that currently serve as federal and state government offices, hotels and hostels.

The area, which the department is calling the Western Gateway sub-precinct, will house Atlassian’s new Sydney headquarters after the Australian software darling made an in-principal agreement with the government in February.

“A key component of this is a new marker building that will be occupied by Atlassian as the first anchor tenant of the precinct, supporting some 4,000 jobs within a single building that is directly aligned with the goals set-out in the Sydney Innovation and Technology Panel Report.”

Aided by its close proximity to the existing cluster of startups in Camerdown and Ultimo, the sub-precinct is intended to “act as a beacon for future innovation and technology businesses”.

As such, the development of the area will “progress separately and in advance to the remainder of the Central Precinct”. It has already been identified by planning minister Rob Stokes as “appropriate for early rezoning”.

However, it is just one of ten sub-precincts that will make up the larger Central Precinct that is intended to expand Sydney’s CBD further south and support as many as 25,000 new jobs by 2036.

A number of these sub-precincts, including the Sydney Rail Yards sub-precinct and Cleveland Street sub-precinct, fall in areas currently occupied by rail tracks between Central and Eveleigh.

The government has also flagged the potential for potential development or open space over the railway corridor to create “a network of parks, plazas, streets and lanes”.

“Potential development over the rail corridor and at the edges of Central Precinct will enable the creation of a vibrant precinct that supports the aspirations for the growing southern Central Sydney and Sydney Innovation and Technology Precinct,” the Central precinct strategic vision states.

The Sydney Rail Yards sub-precinct, for instance, is envisioned to be a “mixed-use highly urban precinct above the rail yards forming part of southern Central Sydney”.

Acting deputy secretary of Greater Sydney Place and Infrastructure Brett Whitworth said the plans aimed to “transform Central Precinct into Sydney’s next big jobs hub and a cornerstone of the Sydney Innovation and Technology Precinct and create up to 25,000 jobs of the future”.

“Central Precinct is surrounded by world-class universities, more than 100 research institutes, and a vibrant ecosystem of creative businesses, on top of excellent public transport,” he said.

Public consultation on the plans, which will inform planning over the next 18 months, close 27 November.