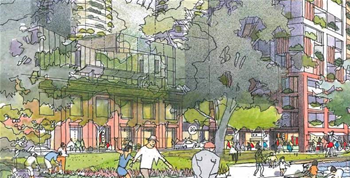 No mention of Google in redevelopment.

Sydney’s long-running saga of where a state government-backed technology hub and innovation precinct will be developed has taken yet another turn, this time into social housing heartland.

The gritty ‘Central to Everleigh’ redevelopment corridor has been flagged by NSW Premier Gladys Berejiklian as the new location just a day after the state government unveiled options for the redevelopment of the Waterloo public housing estate that is slated for demolition.

Atlassian has been named as a co-creator of the new project, along with incubation co-working space Fishburners and industry body Tech Sydney.

“A NSW Government taskforce, headed by Jobs for NSW chair David Thodey, will be created to lead design and development of the new technology and innovation precinct, stretching from Central to Eveleigh,” Bereklian said.

“This will cement Sydney as the technology capital of Australia and create more secure jobs. Central to Eveleigh is already home to Australia’s largest cluster of start-up firms. We want to use that as a base to grow new jobs and new businesses.”

However much of that activity is in already gentrified Surry Hills, a spread that seems to be bounded by Sydney’s version of the hipster proof fence, Cleveland and Regent streets.

Atlassian had initially pinned its hopes on taking over the part of the Everleigh rail sheds redevelopment after the state government put the lease to the market, but was trumped by the Commonwealth Bank of Australia – a decision which provoked sharp criticism from the software developer.

However Australia’s biggest tech company now gets a box seat on the committee for the new development which is arguably a far more ambitious undertaking because of the government’s stated plans to blend commerce, retail, social, affordable and market priced housing together.

What remains to be seen is whether Atlassian and other tech participants will be able to draw on the creation of new affordable housing stock to accommodate students or people on lower salaries as part of the revitalisation, especially if linked with job creation and education initiatives.

The NSW government says the initiative is expected to create 10,000 new jobs by 2036.

Conspicuously absent from the project is Google or Alphabet which had been flagged by the NSW government as a potential cornerstone redeveloper of the asbestos-riddled and derelict White Bay power station in Balmain.

With that plan now parked as too hard for the time being, Google’s next major property move in Sydney is up in the air, despite its property related ventures like Sidewalk Labs making big redevelopment moves in Toronto.

That certainly doesn’t worry Atlassian Co-Founder and co-CEO Scott Farquhar who is talking up the new Sydney technology precinct.

“If you look at every successful innovation hub in the world, from Silicon Valley to Tel Aviv, they all have a centre of gravity – a place the start-up community calls home,” Mr Farquhar said.

“Sydney has the potential to be of one of the world’s leading tech cities and the creation of a tech hub sends a very loud signal – not only to the country, but to the rest of the world – that we’re in the race.”