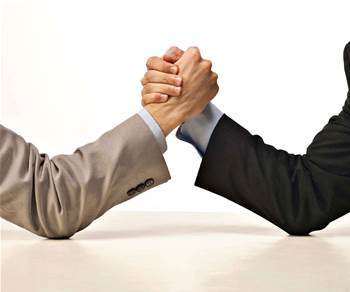 Australia’s top internet service providers continue to control 87 percent of the NBN market, but the number of challengers scrapping for what’s left has more than doubled in just one year.

Analysis by iTnews shows some minor movement in the market shares of the ISP majors but overall they were able to maintain their positions in FY17.

In FY16, Telstra, Optus, TPG and Vocus owned 87.45 percent of all active NBN connections. One year on, iTnews estimates their combined share is 87.42 percent.

Between them, they account for branded services by Telstra, Belong, Optus, TPG, iiNet, Internode, iPrimus and Dodo.

Both Telstra and Vocus - which owns iPrimus and Dodo - managed to increase their share of the NBN market over the past year.

Others appear to have experienced a slowdown in growth of connections.

While TPG’s official numbers aren’t due out for another few weeks, its iiNet brand this week reported having “over 250,000” NBN users.

Depending on how close to 250,000 the official number is, iiNet's NBN market share could have slipped by up to three percent year-on-year, though expected growth in TPG’s own branded services is likely to negate any overall impact for the group.

What is clear is that challenger ISPs managed to eat very little into the market share of Australia’s dominant ISPs.

That is despite the swelling number of challengers: in mid-September last year, NBN Co had “over 50” resellers; a recent NBN position paper puts that number now firmly “over 100”.

iTnews understands there are 46 direct buyers of capacity from NBN Co (a mix of ISPs and wholesale operators that on-sell to smaller players). There are now 140-plus small ISPs buying sub-wholesale services, meaning there could be upwards of 180 ISPs on the NBN.

Despite the enormous competition, new players like Vodafone are still planning to enter the retail NBN market. However, the numbers show they - like others - could struggle to make much of a dent.

The experience of fellow mobile player Amaysim could be instructive. In its few months since launching onto the NBN, Amaysim has carved out a modest 0.12 percent market share.

But it has also segmented its mobile customer database to work out that some 455,000 of its existing customers live in NBN serviceable areas. Were it to secure around half of those, it would move from challenger to sizable NBN player in its own right.

The long-term question is whether the NBN market can support the number of retailers currently vying for a piece of it.

NBN Co CEO Bill Morrow has hinted in recent times that some consolidation may be inevitable, or at very least a change in strategy by a handful of ISPs brave enough to tackle the market on something more than price.

Morrow last month said ISPs were in the midst of a “land grab”, trying to sign up as many users as possible as NBN Co made connections serviceable.

He argues the “land grab” has pitted so many ISPs against one another that it has caused a price war, and that service quality has suffered as a result.

“This price war phenomena is present as we are rolling out 100,000 new homes of inventory every week, and will be present for the foreseeable future until we actually relax and get the majority of these homes connected,” Morrow told a recent NBN joint committee hearing in Sydney.

“Then we can see a rebalancing, perhaps of the number of retailers that are in the market that will adjust price and adjust by service quality, and you will see more differentiation there.”

It’s worth noting that the ‘land grab’ is regularly far less than 100,000 premises a week. Though NBN Co cites that number frequently, it historically occurs only in the lead-up to the company wanting to hit a rollout target; the average number is closer to 47,000 over the past six weeks, for example.

That means the ISPs are scrapping for proportionally less, and those stuck in the challenger space have access to an even smaller piece of the pie.

Some of those already on the NBN are watching their margins shrink. Vocus, for example, said an NBN connection is worth $5 less in margin than an older ADSL one, and that gap is growing.

Others like MyRepublic are making no margin at all, and are instead taking a financial hit to test higher-end services over the NBN. They hope in part to expose the economics of the NBN construct, but the viability of such an approach remains questionable at best.

One possible future already playing out is for challengers to grow in the shadow of their much larger owners. Telstra's Belong, for example, has managed a respectable 70,000 NBN users, for a 2.86 percent market share.