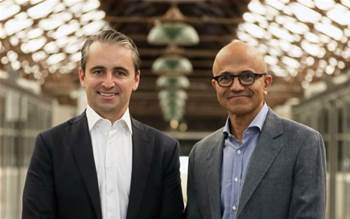 Microsoft bromance comes to the fore.

The Commonwealth Bank of Australia is readying for an all-out push to reclaim its once crushing technological lead over its peers from a decade ago, with key supplier Microsoft set to play a much bigger and more public role in life after the banking Royal Commission.

After a horror 12 months for all Big Four banks, Australia’s largest institution is this week widely expected to spell out a new technology strategy aimed at rectifying past regulatory sins, spurring economic growth and positioning CBA’s technological driver for social good.

However, unlike previous tech strategy launches that have fallen to chief information officers or group operations executives, the CBA’s new push will be very publicly led – and owned – by the bank’s chief Matt Comyn to send the message that bank tech leadership starts at the top.

CBA’s marquee project was its circa $1 billion real-time core banking system, ultimately a big, bold, bet on itself that paid-off – in spades.

As the new core system came online, CBA creamed margins, smashed opponents and then arguably lost sight of the big picture after both Harte and Norris departed, their respective missions complete.

The competitive advantage in information technology, led by a shift to cloud-based software, had enabled enormous efficiency gains and customer satisfaction success, yet it soon turned into a liability as the bank sweated its older systems, especially around compliance.

Stung to the tune of $700 million by the massive AUSTRAC notification failure scandal that flowed from its ATMs – that were essentially seen as a legacy cash technology at CBA – and then appalling revelations around CommInsure, Norris’ successor Ian Narev was jettisoned.

His successor, the fresh-faced and charming head of the CBA’s massive retail bank who had dared challenge the bank’s utterly ruthless pursuit of profit, was elevated to the top as the bank entered a year of very public contrition and conspicuous humility.

That period of shame, many believe, will effectively end on Wednesday when Comyn sets out his vision for how the CBA will function in the future with heavy emphasis on making life better and easier for customers, not just shareholders, by resetting the technology agenda.

At a broad level it will be about the bank using its massive tech shop to empower its customers to make material improvements to their lives and financial wellbeing, primarily through better data sharing, monitoring and removing known friction points.

And despite the relative recent quiet, much of the structure to execute on Comyn’s strategy have already been rolled into place.

When CBA tore-up the unofficial boycott of Apple Pay as a 2018 Christmas gift for customers, millions piled onto the app within the first month, instantly vindicating Comyn’s call that the bank needed to give back to customers to earn their loyalty and respect.

It is widely known that banks make negligible interchange margin on the Apple Pay product, one of the reasons they held out for so long.

To understand where CBA tech is likely to head under Comyn, it’s well worth revisiting the projects he guided when at the retail and institutional arms of CBA.

Before Kiwis Norris and Harte appeared, the CBA had, through the noughties, been developing a massive new customer management system dubbed CommSee, built on Microsoft’s .NET architecture.

Comyn was deeply involved in the project and system build that still runs to this day, and is regarded by analysts including Gartner as a reference case of an enterprise-wide CRM gone right.

That project, and Comyn’s role in it, is now coming sharply back into focus, along with the influence of Microsoft.

Last week, at the launch of X15 Ventures, Microsoft’s Australian MD Steve Worrall conspicuously took to the stage with Comyn as a partner in the wholly CBA owned technology ‘builder’ project, though what Microsoft’s exact role is is still deliberately vague.

Azure will undoubtedly play some role as a cloud provider, but it is Microsoft’s enduring role in CommSee that has many anticipating developments in that space.

“Clear digital and technology leadership is critical for the Commonwealth Bank, we see that at the heart of what we want to deliver for our customers strategically,” Comyn said at the launch.

“I think the organisation is at its best when it's really bringing some exiting propositions to market,” Comyn continued before calling out CommSee as a pivot point for the bank.

“When we were building something called CommSee in the early 2000s… we actually partnered with Microsoft. And we spent time going [back and forth ] to Seattle. [The] technology at the time was coded in VB .NET which was sort of leading at that time.”

Comyn said that the success of the project between the two organisations of scale had taught both parties a lot in terms of culture, with Bill Gates ultimately flying down to meet then CBA CEO and renowned technology critic David Murray.

The ability to harness the creative capabilities coming out of companies like Microsoft was something the CBA still sought, Comyn noted, before revealing he’d already been talking extensively with Microsoft CEO Satya Nadella.

On the same day as Comyn launched X15, Microsoft's CEO Satya Nadella uploaded a super-friendly video of a fireside chat between himself and Comyn, apparently filmed during Nadella’s visit to Australia late last year to rally the troops and seal deals with key customers.

As previously mentioned, details of Microsoft’s new role in X15 and across the wider bank are still lacking, but the video clearly demonstrates significant groundwork has been laid.

One logical reason Comyn has opened the throttle on new customer-facing projects is that the CBA will need more data, and clearer data than ever, to deal with competitors under open banking, better known as the consumer data right (CDR), when it bites this year.

While the intention of the CDR is essentially to allow easier account and service contestation and portability based on value (interest rates, fees etc) it’s also turning into a customer experience dogfight as big institutions try to retain customers.

At the relaunch of CBA’s main banking app mid last year, the CBA revealed it could use customer data to crawl public sector systems to determine whether customers were eligible for or getting their full entitlements to government benefits.

Dubbed ‘benefits finder’, the new tool could hand back as much as $10 billion in rebates and concessions to Australians, CBA's chief digital officer Pete Steel estimated at the time.

The announcement was coupled with the revelation CBA could now use government-grade biometric authentication for onboarding, dealing the bank into the digital identity game Canberra has found so perilous over the years.

While the CBA did not conspicuously talk it up, what the ‘benefit finder’ move revealed was that the bank was approaching a state of actionable customer knowledge: that it probably had a far more accurate, timely and definitive picture of peoples’ financial affairs and wellbeing than the government.

Pegged with a question as to whether the CBA’s data could potentially nuke Centrelink’s reviled robodebt system, since junked because it was manifestly illegal, Steel ducked a direct answer but acknowledged CBA wanted to make easier for people. A lot easier.

As the bank with by far the largest cohort of pensioners and low to middle income earners, CBA’s concerns around the welfare system are not immaterial.

Even small advancements on better income management (like spending trackers), bill payments and discretionary spending can go a long way to boosting customers’ credit rating and eventually put them on a path towards potentially buying a hose or taking out a small business loan.

The CBA’s next target for data-driven social good appears to be tax, where it’s backing a wider banking push to be allowed to see tax data to make credit risk decisions, a move that could open up finance to the growing number of self-employed people not called as having a full time PAYG job.

While the CBA has a clear commercial interest in building a better risk picture, so too arguably does the Treasury that is urgently trying to kickstart growth after successive government regulatory interventions – like strict responsible lending criteria – created a debilitating credit squeeze.

The real deal on credit

On the sidelines of the X15 launch, Comyn tells iTnews he has no doubt the Australian market is shifting from credit card transactions to debit and account-based products.

He says it’s a definite trend, and one the CBA is acutely aware of, though insists the bank’s US$300 million equity plunge into Scandi-chic online shopping and buy-now pay later platform Klarna is about more than stemming any leakage from once lucrative credit cards.

In November 2019, iTnews revealed industry analysis that the issuance of debit cards had eclipsed credit cards in August that year, a major tipping point for the local finance sector that has produced a rash of credit card killing buy-now pay-later (BNPL) offerings.

While many of the transactions that go through BNPL platforms are represented as a either a Mastercard or Visa transaction using a one-time virtual card number, it’s the platform that collects, maintains and resells customer data gold like purchasing intention – one of the reasons the CBA is so enamoured of Klarna to the tune of a 5.5 percent equity stake.

That purchasing behaviour data once used to come at a high price from card schemes or major merchant backed data mining plays that have regulators sniffing around.

With credit card interest rates at circa 18 percent to 20-plus percent against secured rates well below 5 percent, Comyn knows full well he could soon be assessing mortgage applications from CBA customers who have never held a credit card in their life.

He also knows less reputable parts of the BNPL sector, usually rebadged payday lenders and phoenixed predatory consumer leasing, will be coming for his customers unless CBA is in the game not just with a product, but with the user experience and depth of data needed to make that happen.

Comyn’s role in CommSee taught him massive CRM and customer data projects can succeed, especially when there is top-level buy-in from the vendor’s leadership.

That buy-in is now on very public display and by the end of the week will be up in neon lights as Microsoft throws the kitchen sink at celebrating its bromance with the CBA.