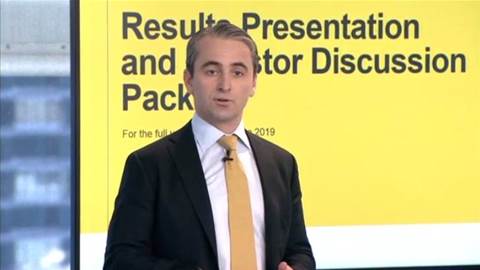 The Commonwealth Bank of Australia has declared itself as the digital leader of the Australian banking market, but has taken a $100 million stake in the controversial buy-now pay later market, potentially to hedge against margin decline from forfeited transaction and payment fee revenue.

But it seems the cash that used to flow from transactions, account keeping fees and mortgage interest just ain’t what is used to be, even if it pulled in an $8.49 billion cash profit for the full year, down 4.7 per cent.

“We have an unrivalled leadership position at the moment in digital. We have more than 7 million active digital users,” CBA chief executive Matt Comyn said announcing the bank’s annual results, revealing the institution has taken a US$100 million stake in European digital lay-by play Klarna.

“As part of our strategy to lead in retail and commercial banking and to extend our digital capabilities, we have signed an agreement with Klarna, a leading global payments provider with over 60 million customers and 130,000 merchants,” the CBA said in its profit announcement.

“We will become Klarna’s exclusive partner in Australia and New Zealand and intend to further invest at the parent and local level to support this partnership,” the CBA said, adding that “Klarna generated US$627 million of revenue in 2018.”

The move to buy into Klarna is far from a gimmick and brings the CBA directly against local market darling Afterpay, which recently ran into regulatory headwinds after AUSTRAC hit it with an audit on suspicion of allowing money laundering ... familiar pain for Australia's largest bank.

“We’re excited about some of the innovation we’ll be able to bring to market,” Comyn told an investor briefing on Wednesday, adding there would be more detail later in the year, comments that suggests the CBA is keen on integrating new functionality.

The Klarna investment send a strong signal to investors that CBA isn’t about to let fintech disrupters mow its grass in the lucrative unsecured credit market where banks have been constrained from boosting profits by tightened lending criteria.

At the same time, profits from electronic transactions like ATMs, credit card fees, transaction charges and overdrawn account fees have all been wound down, stripping more incremental profit away.

The reduction in fees is part of a wider post-Royal Commission attempt to recast banks as socially responsible rather than greedy and rapacious. CBA said “forgone income” was now saving customers $415 million annually, money it once used to trouser.

The question the CBA is now facing is how to supplement its transactional profits in a market where consumers are increasingly shopping online using lower cost products and ‘frenemies’ like Apple are gouging away at once-lucrative interchange fees levied on digital wallet transactions.

The bet on Klarna indicates CBA is now prepared to rethink unsecured credit in the digital age to access consumers not able to get a credit card or who may not want one because of interest rates that hover between 15 percent and 22 percent.

For the most part, CBA’s Klarna investment came as the main surprise on digital and IT after Australia’s biggest bank revealed its new app and related innovations last week.

The big play, which Comyn reiterated on Wednesday, were major enhancements driven by AI, analytics and machine learning to power its customer service engine so that it can make far more intuitive suggestions.

At the same time the CBA is trying to keep its customers sticky and glued to its digital ecosystem, launching a payment rewards scheme that will compete directly with the likes of Qantas Frequent Flyer points, Flybuys and Woolies Rewards, products that are largely fuelled by card interchange fees.

With the NPP, open banking and comprehensive credit reporting all underway, it could be a prudent time to wean the bank off interchange revenue, which Comyn doggedly defended a year ago.

CBA’s chief financial officer, Alan Docherty noted that the investment mix on technology infrastructure and related operating costs are logically expected to keep increasing as people increasingly shifted from physical to digital interactions across payments, transactions and interactions with the bank.

True to Docherty’s observation, tech investment has jumped, and high.

The CBA’s information technology services expenses soared 8 percent, increasing by $138 million to a whopping $1.9 billion for the full year on the back of remediation-related fixes meted out by regulators, like the overhaul of risk and compliance systems in the wake of the AUSTRAC ATM notification debacle.

“This was primarily due to increased IT infrastructure costs, increased risk and compliance investment spend and higher software license costs,” the CBA said in its operating expenses statement.

On the capitalised software front, CBA actually managed to hammer down its balance by 6 percent to land at $1.7 billion, down $107 million.

There are strong sign CBA’s ongoing war on legacy software is performing well with software write-offs falling to just $13 million to June 2019, down a massive 82 percent from $71 million in the previous corresponding period.