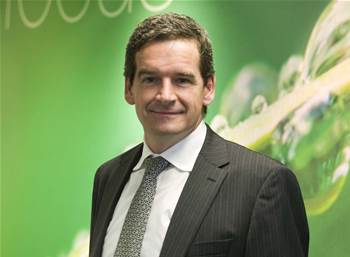 Michael Harte, Group Executive of enterprise services at the Commonwealth Bank of Australia.

Executives resisting the use of public cloud services due to concerns over data sovereignty, security and control have been fed "garbage" by incumbent vendors, according to CommBank CIO Michael Harte.

CommBank came out as a prominent user of Amazon Web Services today.

Harte told an audience at Sydney's Westin Hotel that CommBank has shifted a dozen applications onto Amazon, leading to a 40 percent reduction in infrastructure costs.

With AWS setting two Sydney availability zones live this morning, Harte had the confidence to mock cloud computing naysayers in a warts-and-all presentation.

He made no specific mention of regulations specific to the banking and finance sector, instead targeting traditional server and storage vendors.

"Our traditional suppliers came to us and said, 'This on-demand stuff doesn't look very secure, mate'.

"I'm here to tell you those concerns are garbage," Harte told the audience, to a round of applause.

"We've halved our storage costs, halved our app testing costs, and overall saved 40 percent across all the resources we consume as a service.

"What's harder to quantify is the happiness this provides our business partners, when we can now deliver services in minutes and days, and focus our IT guys on services our customers want. This can free up an enormous amount of capital and time in the business.

Harte said his long-stated vision for buyers to form collectives that drive lower prices from IT suppliers hadn't panned out as he had hoped.

"I don't think Australia as a buying community has moved fast enough," he said. "We started talking about cloud in 2006 and 2007."

Harte urged attendees to convince their boards of the value of public cloud solutions.

"it is incumbent on all of us to get in fromt of our executive committees," he said. "We need to go to the head of operations and the CFO and and convince them this is a smarter way to do business."

Large enteprise should focus on "higher value activities" like analytics, he said, and "leave it to the Amazons to build the scale for us."