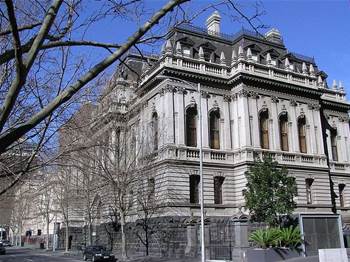 The irony was not lost on Internet Industry Association (IIA) chief Peter Coroneos as he discussed antiquated laws with the chief information officers of 20 Australian universities over a high definition video conference link yesterday.

Universities have among the best networks in the country available to them, but are grappling with a lack of protection when it comes to their governance of what occurs on those networks.

His video address was organised and facilitated via a Gigabit Ethernet link on Australia's Academic Research Network (AARNet).

Coroneos told the CIOs that the iiNet/AFACT case seeks to determine whether an internet service provider is accountable for the acts of a subscriber if all it is providing is internet access.

The ISP won the case emphatically in February, but the organisation representing the film industry (AFACT) has since filed an appeal, which is due to be heard in early August.

Coroneos explained that universities are even more legally exposed to copyright infringement action than carriers and ISPs, as they are currently ineligible for safe harbour protection under Australian law, which shields service providers from damages associated with the actions of their subscribers.

He claimed that Australia's universities were "left in a very vulnerable position" in the aftermath of Australia's Free Trade Agreement with the United States.

The copyright amendments made under this agreement, modelled on the United States' DMCA (Digital Millennium Copyright Act), awarded safe harbour protections (immunity from damages) to service providers - but the definition of a service provider in Australia was limited to "a carriage service provider as defined by the Telecommunications Act."

In the United States, by contrast, the definition of a "service provider" might include a university that provides internet access to its students, a search engine or even a web hosting company.

Coroneos said that should the Federal Court overturn Justice Cowdroy's historic judgement in the case against iiNet, universities would continue to suffer a "theoretical exposure".

"I am not assuming that the Federal Court would overturn the iiNet decision," Coroneos said.  "But it is important to recognise a gap in Australia law that has no justification. "Universities ought not suffer undue risk because of a legislative oversight."

Should the Federal Court's decision on iiNet and AFACT be upheld, Coroneos expects universities to feel some sense of protection. The case would create a precedent whereby the law recognises that a person has no duty to enforce the copyright of another - or more specifically that a service provider is not accountable for the acts of a customer if all it is providing is internet access.

"A university would therefore not be liable for the actions of the student body - so long as all the university is doing is providing access," Coroneos said.

It would also reverse a precedence of copyright cases going against the university sector. Back in 1975, the University of NSW was the subject of action in what is now referred to as the 'Moorhouse' decision, in which it was ruled that universities 'authorised' copyright abuse by providing the means of infringement - in this case, photocopiers - available for student use.

In the original iiNet case, by contrast, Justice Cowdroy found that the means of infringement was BitTorrent file sharing software, not iiNet's provision of internet access.

"It is truly incredible that universities are looking at this exposure again today, lamenting their lack of eligibility for safe harbour protection," Coroneos said.

Coroneos said the IIA would continue to try and convince the Attorney General's Department of the need to widen the eligibility for safe harbour protection to include organisations like universities and search engines.