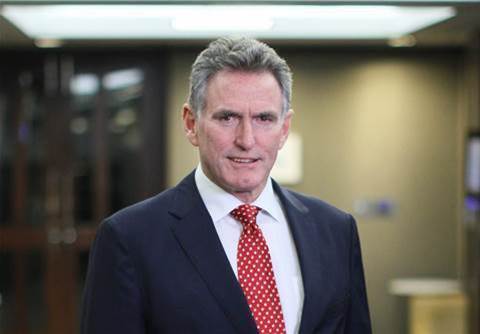 Incoming National Australia Bank chief executive Ross McEwan has wasted no time cleaning out the bank’s sprawling technology estate, kicking a whopping $1,056 million worth of software capitalisation to the curb ahead of first half results.

The staggering amount was unleashed to the markets on Monday morning, dwarfing a $268 million pre-tax customer remediation charge and $214 million impairment booked against MLC Life.

The depth of the software capex purge will hit NAB’s earnings to the tune of $714 million after tax and is certain to fuel speculation of a restructure of the bank’s comparatively disaggregated technology operations.

Rival banks have been anticipating NAB will make a major technology move since McEwan’s return to Australia from Royal Bank of Scotland where he is credited with turning around what had been close to a failing institution when he arrived in 2012 in the wake of the GFC.

However the bank most likely to be looking over NAB's shoulder is the Commonwealth Bank of Australia which has lost both its chief digital officer, Pete Steel and chief technology officer Matt Pancino in quick succession as CBA's CEO Matt Comyn puts his leadership stamp on the bank.

McEwan is well acquainted with CBA having been its highly regarded retail banking head as the institution went through its root and branch core overhaul led by fellow Kiwi and reformed assembler coder Sir Ralph Norris and the indefatigable Michael Harte as CIO and head of operations.

Pipped at the post to take the leadership of CBA by Ian Narev in 2011, McEwan’s protégé and now rival was Comyn, who eventually rose from CBA head of retail to its chief after Narev fell on his sword in the wake of the AUSTRAC scandal of smart ATMs that didn’t ping regulators.

Few doubt there is housecleaning to be done at NAB, with the bank suffering numerous outages and availability slips, despite serious efforts to boost its use of cloud computing to lift performance.

A major part of the $1 billion software capitalisation purge is a change to the threshold at which software can be capitalised (deferred as an expense) that has been more than doubled from $2 million to $5 million.

NAB’s note to investors firmly suggests McEwan isn’t about to let drifting IT builds continue, saying that the lowering of the threshold “reflects a change in approach to managing projects which is intended to uplift business accountability for projects less than $5 million.

“The change will be applied to both current and future software balances and is expected to reduce NAB’s capitalised software balance at 31 March 2020 by $1,056 million and NAB’s 1H20 cash earnings by $742 million after tax,” NAB told investors.

“There is no impact on Group capital given capitalised software balances are already deducted from Group CET1 capital.”