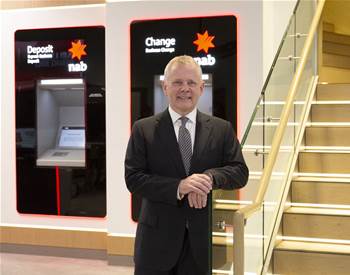 The National Australia Bank suffered the highest number of outages classed as “critical incidents” in three years in the six months to March 2019, but its management insists the institution's huge tech-led transformation is on track and delivering results.

The shocker of an online reliability performance score came in at a hefty 7 critical incidents for the first financial year half of 2019, a level disclosed in NAB’s results presentation to investors today.

The bank defines a critical incidents as “significant impact or outages to customer facing service or payment channels.” 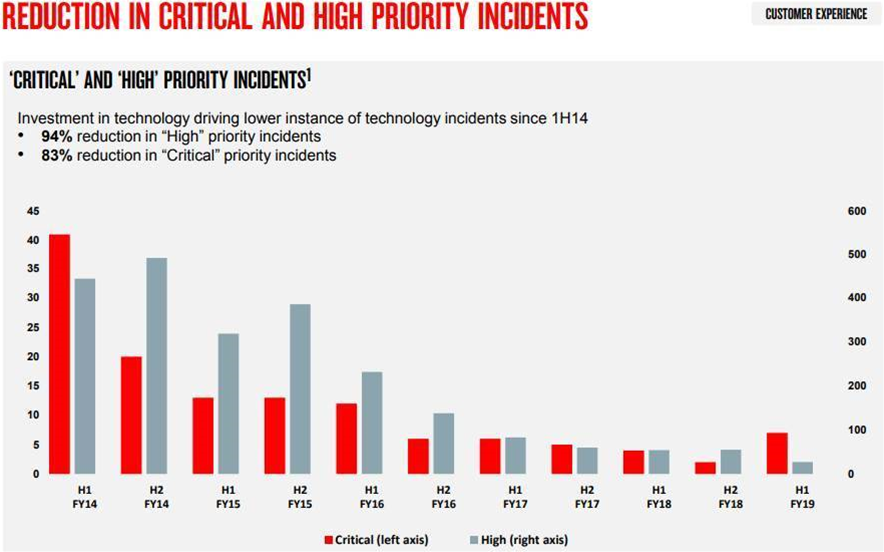 And there’s been a few.

The bank suffered multiple glitches in January as well as being embroiled as the acquirer in a major payments SNAFU unleashed by client RACV that erroneously emptied insurance policy holders' bank accounts.

And in November 2018, NAB revealed in its annual report that it had forked out $7.4 million in compensation for an outage in May 2018 that left thousands of businesses unable to trade without cash.

The rise in outages comes as NAB pushes ahead with a raft of legacy systems retirements and application migrations to the cloud that is a key pillar of its attempt to greatly simplify its operations, carve out complexity and reduce costs.

That push is part of the broader bank rebalancing effort announced in NAB’s 2017 full year results that will jettison 6000 staff but rehire another 2000, with a particular emphasis on embedding technology skills.

Also in the mix is a CRM based on Salesforce and IT infrastructure rebuild, including multi-cloud from AWS and Microsoft Azure.

NAB executive general manager for Infrastructure, Cloud and Workplace, Steve Day, was adamant the transformation will deliver improvements in resilience.

“We are significantly investing in our technology to improve our customer experience. NAB is in the midst of a three-year transformation; we are investing in a technology strategy that is focused on resilience, agility and being more aligned with the needs of our customers," Day told iTnews.

“Resilience is a key pillar of our technology strategy; we are driving architectural and development decisions to design and implement technology to help limit the impacts from any operational failures," Day said.

“One of the goals we have from re-architecting our systems and moving to microservices is so that this helps minimise the impact any outage may have on our customers. Additionally, one of the key aims of our approach to Cloud technology is to be far less dependent on the physical infrastructure within our traditional data centres.”

On Thursday NAB’s CEO Phil Cronican and CFO Gary Lennon also talked-up the progress of insourcing within the bank’s tech division, a key part of the rebalancing that’s intended to redress lost internal capability previously ceded to vendors and outsourcers.

However Chronican, who replaced recently jettisoned NAB boss Andrew Thorburn, kicked the door ajar as to whether the program would ultimately remain in its current form, given he is an acting chief executive.

“We have said we are committed to the macro targets of the transformation, but it would be irresponsible of us not to acknowledge that the environment we are operating has changed,” Chronican told an investor briefing.

“It’s a much tougher environment from a regulatory view point, community expectations have shifted on us and we are trying to adapt around that so we can continue to deliver the substance of the transformation while we are facing the reality we deal with.”

While the NAB transformation continues apace, many performance numbers, like headcount reductions and the hiring of temporary staff, were not as strong as the previous half.

“Productivity this half a bit lower than previous half. We had a few programs that drifted over the March half year that were delivered in April.”

He intends to make that ground up though, saying there’s “a very fulsome agenda on initiatives in flight for the second half.”

“We expect a fairly solid outcome in the second half on productivity.”

However post-Royal Commission compensation to customers coupled with increased compliance burdens that relate to systems that are essentially non-accretive have worked their way into the big tech transformation, NAB’s two most senior executives conceded.

The horror outage number is bad news on that front because the Reserve Bank of Australia and financial regulators are carefully eyeing whether attempts to prune costs are hitting online reliability, an issue regulators increasingly regard as systemic risk.

Lennon talked-up the great tech reskilling, insisting there was upside in that bringing work back in house was sometimes working out cheaper than expected.

“We are getting more benefits than what we thought around upskilling, particularly technology and digital capability through the insourcing we are doing,” Lennon said.

“We are continuing to insource where we see opportunity, that’s bringing back in house functions that were previously done externally and essentially by technology companies."

Previous NAB chairman was certainly no fan of external IT consultants, roasting them in a grand introspection into NAB's failings that ultimately cost both him and Thorburn their jobs.

Lennon said that within the insourcing numbers to date “there’s elements of new data capability.”

“AML, CTF, compliance … you could argue they are new capabilities in our current environment.”

Which does rather make you wonder what the old ones were.

Still, if you’re at NAB, things can only get better.

[Correction: an initial version of this story erroneously stated the number of outages based on a misinterpreation of the graph at 100. NAB has advised the correct number for critical incidents was 7 and high priority incidents was 27]