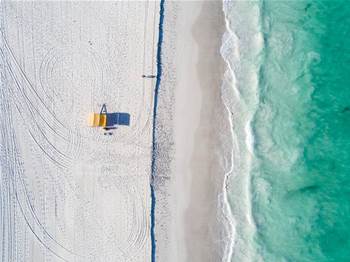 Australian lifeguards using beach safety drones with AI smarts to spot sharks and swimmers from the air are now able to control the unmanned vehicles and view footage from the palm of their hands.

The company behind the initiative, the Ripper Group, has launched a new app allowing rescuers to stream live video footage from the drones affectionately known as Little Rippers to mobile devices.

The app gives new portability to the unmanned aerial vehicles (UAVs), which were first introduced on a trial basis to complement helicopter patrols on NSW’s beaches during the 2016/2017 summer.

That trial with Surf Life Saving NSW has since evolved into a national project funded by Westpac, which was launched in December 2018 as spin off from the Ripper Group.

The drones use an AI system developed by the University of Technology Sydney known as SharkSpotter, which is capable of autonomously identifying and differentiating 16 shark species from dolphins and clumps of seaweed with 90 percent accuracy.

The same technology is now being used to spot crocodiles in Queensland after the state government approached the Group with the challenge.

But while the early system could be used as a one-man operation, Ripper Group CEO Ben Trollope told iTnews it was ungainly to setup.

“The original SharkSpotter box when it was originally released was a 15kg mega computer,” he said on the sidelines of the Amazon Web Services Public Sector Summit in Canberra.

“Ultimately, that required a generator to power it on the beach, so it was large scale, it was big, [and] it was heavy on the hardware and hugely expensive just to buy the hardware and infrastructure to do it.”

The new app, which is currently limited to iOS devices while an Android version is developed, is intended to simplify the operation of the drones by cutting down the number of operators required.

“Previously, it took one operator to keep their eyes on the screen and the aircraft to be able to maintain situation awareness around the aircraft,” Trollope said.

“With the release of the app, we’re effectively looking at that screen to be able to try and see whether [the drone] was identifying anything.”

Trollope said that the company had worked with AWS over the last six months to push the system into the cloud to allow the company to “get rid of the hardware completely”.

The hyperscale cloud provider has similarly been responsible for reducing the streaming latency time, which can sit at anywhere between six to 30 seconds, to “under half a second for the first responder capability”.

Removing the need for hardware will likely need to an accelerated rollout of the program, which Trollope said “will continue to expand”.

The drones are currently in operation in 51 locations across Australia, with the bulk concentrated in the eastern states of Australia such as NSW and Queensland.

As reported by iTnews in June, the ability for a Little Ripper to automatically identity the signs of a swimmer in distress has been “very difficult” due to the limited amount of data to feed into the AI system.

“There’s very little data out there about people in distress, and what’s the difference between someone in distress and someone just waiving to the drone,” Trollope said.

“So what we’re now pushing for is the identification of a rip, and whether there’s people in that rip.

“Once we find that exact scenario where you do have a rip and you do have people in it, then the drone will respond to the alert the operator and drop a rescue body required.”

Trollope said that while the solution was still in development, the company wanted to ensure was right to avoid a “false sense of security”.

Other project such as the crocodile initiative with the Queensland government taking precedence in the winter period.

“Every flight we do as Little Ripper we’re continually detecting data. We’re collecting data on rips and people in rips, so we can continually feed that into the AI deep learning server to make it smarter,” he said.

“Once it is ready it will be released, but it’s not there yet. It something we want to make sure we get right.”

Alongside continuing to expand the existing drone program, the Ripper Group is also looking to introduce a long-range drone to autonomously patrol beaches in NSW within 12 months.

The drone, which has been acquired and will arrive in Australia within the next two weeks for testing, will be used to patrol between Sydney to Newcastle.

“We’re looking at around 150km or about two-and-a-half hours of flight time at this stage,” he said.

“As battery technology gets better it will only get better across the board.”

Trollope said the ability to have a long-range drone have been enabled by the AWS live stream capability, allowing operators to have near real-time vision.