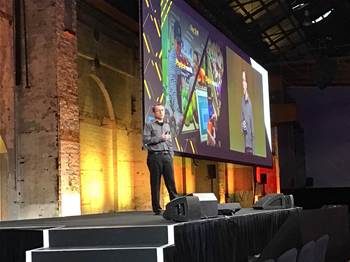 Where the digital innovation model has worked.

Eshkenazi made a rare public appearance at last week’s SAP e’ffect conference in Sydney where he showed off the Olive conversational AI platform for the first time.

But the real purpose of his talk was around “essential ingredients for innovation” - essentially key learnings from the first two years of the WooliesX operation.

Eshkenazi joined WooliesX in August last year, lured away from the technology executive team of Costco.

He made the shift, he says, after careful consideration of the future trajectory for retail.

“You've heard all the stories about doom and gloom in retail. Well, let me tell you, probably not yet [for us],” Eshkenazi said.

“From my perspective I don't believe that there will ever be a better time in the history of retail to be a part of it due to the incredible transformation that's occurring.

“I'll take it another step further - there isn't a better time to be a technologist in retail than now.”

There is considerable interest, both in retail and more broadly, in the change and transformation that WooliesX is driving in its larger parent.

Save a handful of presentations - and the odd public technology trial such as Scan&Go smartphone shopping - much of WooliesX’s operations have been kept out of view.

Eshkenazi changed that somewhat by providing an update on how thinking - both internal and third-party - is shaping the direction that WooliesX is taking.

The WooliesX operating model, he suggested, was a combination of purpose, people and platform.

With two years under its belt, WooliesX’s purpose for existence remained strong, he said.

“WooliesX was established to combine the power of digital, data capabilities, our loyalty program and financial services, and put it all together with the right people and transform the company through a digital transformation and innovation,” Eshkenazi said.

“What was interesting - and what Woolworths saw - is the things that are important that we need to focus on. And that is, connected customers are expecting connected experiences, not disconnected ones.

"They're expecting convenience of a different kind, and they also expect hyper-level personalisation.

“Those three components combined together for Woolworths is our purpose.”

Eshkenazi said that keeping everyone aligned around the purpose formed a major part of his role as CDTO.

“I spend half of my day normally in this piece, aligning with my peers, having a conversation - are we still on the same page, are we aligned with the mission, are we together, are we feeling good about how we're making progress?” he said.

“It’s a critical component [to success].”

Finding a team of people that would come together around the shared purpose was also important, Eshkenazi said.

“The only time that this works is if you're surrounded by people who believe the same thing that you believe - you wake up in the morning, and you work with those same people who have made the same sacrifices that you did,” he said.

Location had been an important factor in attracting the right people, he noted.

WooliesX is based in Surry Hills in inner Sydney, well away from Woolworths’ headquarters in Sydney’s northwest.

“We needed to attract a different kind of talent,” Eshkenazi said.

“The engineers and the data scientists don't want live in the Hills District unfortunately for one reason or another.

“They live in the city, they want to be close to that environment, and be connected to others.

So that's why we moved there because that's where the talent is, and we continue to grow.”

However, he noted, “great purpose and people who believe in the purpose isn't enough for innovation”.

There also needed to be the right “platform” in place for innovation to occur, he said.

“That platform is what creates the special environment for ... new ways of doing things to flourish so that people can be successful.”

Eshkenazi said that the platform involved several elements, though two of the key ones were Agile ways of working as well as the autonomy to do what they felt was right.

“WooliesX invested in Agile ways of working,” he said.
“But the more important one that many companies miss is autonomy, a synonym for freedom.”

He said the leaders in WooliesX were encouraged to define problems and a mission and then to “step out of the way”.

“We let great people get things done,” he said.

Eshkenazi said that the proof of WooliesX’s approach was in the growth of digital in the broader Woolworths business.

“WooliesX has been around for about two years,” he said.

“The demand continues to increase.”

Eshkenazi cited last week’s agreement with US startup Takeoff Technologies in the online fulfilment space as an example of WooliesX’s influence having a positive impact on the broader Woolworths business.

He suggested that such technology trials and tie-ups would “continue to happen more and more” as WooliesX continued on its current trajectory.