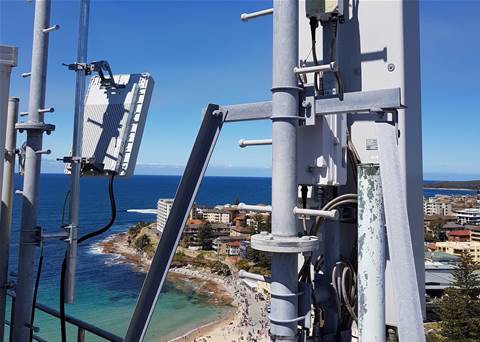 Vodafone is set to begin upgrading selected cell sites at the end of next year with new antennas capable of a minimum three-fold increase in site capacity.

The telco began a three-day field trial on Wednesday of massive multiple input multiple output (massive MIMO) technology made by Huawei at a cell site near Cronulla in Sydney’s south.

It is often combined with another technology called beamforming, which allows radio signals to be better directed towards users in the coverage area of that cell.

Vodafone’s field trial is using a custom antenna system with “32 small internal radio frequency transceivers” and beamforming enabled. However, it is servicing only eight devices/users.

The telco is running the trial using 20MHz of its 1800MHz spectrum, which is currently used for 4G.

With that field trial configuration, Vodafone said cell site throughput had reached 656Mbps on the first day, increasing to 717Mbps.

“When you look at a 20MHz carrier in a traditional antenna system, typically that’s 150Mbps of capacity that is shared across multiple users within an area,” Vodafone’s general manager of technology strategy, Easwaren Siva, told iTnews.

“What you’re seeing here in this demo is a 4x increase in capacity of that same [spectrum] asset.

“Our expectation was the capacity increase would be between 3x and 5x.”

Siva said it was theoretically possible to achieve a 7x capacity increase, assuming all users in the cell were using the latest devices possible.

However, he said Vodafone was using “current generation devices” in its field trials.

“The expectation is when we roll this out in the field we will probably be seeing a 3x improvement in capacity, but over time as the latest generation of devices that are being sold slowly become the bulk of the [customer] base, network capacity will improve as well,” Siva said.

The technology isn’t about giving individual users extra speed; rather, it’s about making sure Vodafone’s network can support more users per cell site, and to provide a consistent experience to everyone connecting to the network.

No decision has been made on which cell sites will benefit from the technology first, however, Siva noted it is likely to be in CBD, inner-city and metropolitan zones.

Rolling out the technology is likely to take several years. Siva said there was no specific budget for the project, and that money was coming from a pot dedicated to continuous improvement of the network.

Both Optus and Telstra have also conducted their own massive MIMO trials.