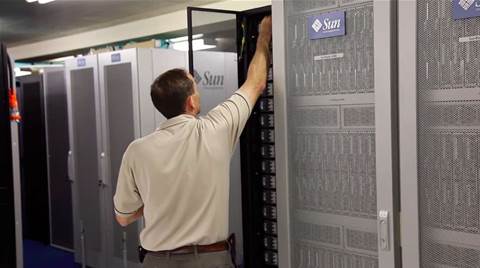 Gartner held its annual ITxpo in Sydney this week and The Crunch was there to chat with CIOs and hear what the "mastermind keynote" speaker, Telstra CEO David Thodey, had to say.

Thodey was under the spotlight on Tuesday, where he ruled out expanding the carrier's operations into the provision of IT services, telling analysts that he would rather the company stick to its knitting.

iTnews is running a caption competition related to Thodey's appearance at the ITxpo. Best caption wins an 8GB iPod Nano.

Other highlights from ITxpo included Andy Kyte, vice president of Gartner research, who said that orphaned applications were one of the biggest issues facing IT administrators.

Munir Kotadia also discovered he has something in common with Gartner analyst Robin Simpson - neither of them have any sympathy for iPhone owners who were infected by the rickrolling virus.

In Canberra, meanwhile, Australia re-entered the big league of global supercomputing this week when a 140 teraflop beast was unveiled at the Australian National University.

The new system is the most powerful supercomputer in Australia. It was supplied by Sun Microsystems and contains 3,000 quad-core Intel Nehalem processors with 36TB of memory and a petabyte filesystem.

Kotadia was there with his camera.