Telstra pushes to fly drones beyond line of sight 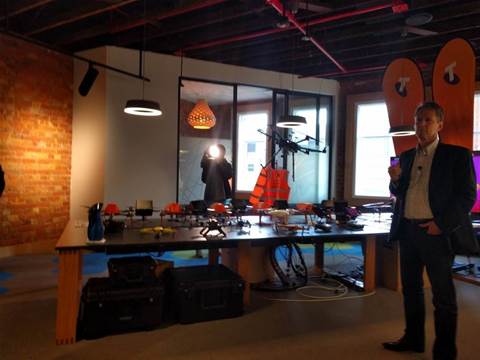 The telco is striving to prove to the Civil Aviation Safety Authority (CASA) that drones can be safely operated beyond visible sight through sensor technology and mobile networks like Telstra’s.

Drones, as a component of the larger internet of things (IoT), play a big part in the new Telstra Labs function unveiled today.

Telstra Labs pulls together all of the telco’s product and technology development activities, and also includes a new IoT lab located inside the telco’s Melbourne innovation facility.

The facility has a special area dedicated solely to drones all of shapes and sizes.

But there’s a current barrier to drone operations for both hobby and commercial fliers: drone pilots can only operate one machine at a time, and they must be able to see it while it’s in the air.

Telstra’s CTO Håkan Eriksson thinks using mobile networks could address these issues and allow drone use to be safely expanded beyond the current restrictions.

“If you use the [Telstra] 4G network, you will have connectivity all over Australia,” he said.

“So say a person is missing and as a drone operator you can’t fly around a hill to have a look on the other side, but you can see what a drone sees [through sensors and a video console].

“We are working with the regulators to see if we can get, for certain applications, [exemptions] to be allowed to fly a drone when you can’t see it as long as you know what you are doing [and there is] good coverage.

“It can be a rescue mission, it can be in agriculture. There are various applications.”

He revealed Telstra had performed a demonstration for CASA where a drone equipped with sensors and connected to the mobile network allowed the pilot to 'see' as the drone and safely operate it beyond line-of-sight.

“There are still negotiations, but they were quite impressed with what we could do and the capabilities of it,” Eriksson said.

“This is a learning process for the whole world, basically, how to manage drones. And if we think about drones as flying mobile phones; they have a SIM card in them and 4G connectivity, which gives you identity and connectivity. And once you have [that] you know where every drone is, and you can control them.

“We are gradually making progress. But if you can use the mobile network as a connectivity means for drones, that would solve a lot of these problems.”

Telstra is not the first commercial entity to seek an exemption to current drone rules from CASA.

Australia Post late last year said it wanted permission to conduct a second trial of drone-driven parcel deliveries to test advances in the technology, like beyond line-of-sight flying and one operator controlling multiple drones - both of which are currently restricted.

The postal body conducted its first trial in April last year in a fenced-off field.

The Victorian government also wants an exemption from the line-of-sight restriction to expand its use of drones in environmental management.