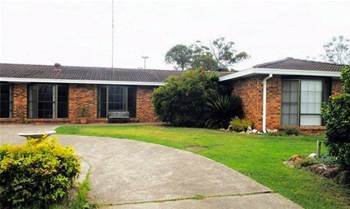 Occupied full-time by a robot.

Telstra has spent six months with “the CSIRO team linked to the invention of wi-fi” testing out different wi-fi setups in a sprawling six bedroom house in the ‘burbs, with a small robot that moved from room to room to measure signal strength.

The telco revealed briefly last week that it had been working with the CSIRO on its wi-fi offerings, coinciding with the launch of a wi-fi coverage guarantee for its NBN users.

But in a blog post yesterday, it revealed the extent of its work with the CSIRO, including that the collaboration is with the CSIRO team “linked to the invention of wi-fi”.

The same CSIRO team at one point held hard-fought patents with most major wi-fi equipment manufacturers following years of legal battles in the US. CSIRO's patents covered core technology that formed part of the 802.11a, 802.11g and 802.11n wi-fi standards.

“Their work changed the world, and to partner closely with them is a scientific thrill,” Telstra's group owner of products Bernhard Severin said.

Telstra said it worked with the team to build a new test environment for wi-fi equipment, “to endorse the overall testing methodology and to develop the test plan, including conducting applied research using wireless technology such as software-defined radio, advanced signal processing, and multi-antenna technologies.”

The result of that is the “wi-fi test house” in Western Sydney, an otherwise unassuming single-storey brick home that - possibly unbeknownst to its neighbours - was occupied by a small robot that moved from room to room 24x7 for six months to check if the wi-fi was working and up to standard.

The whole idea of testing wi-fi signals in an actual home was to better understand the issues that customers saw.

“Wi-fi performance is usually tested in a laboratory environment and for a long time, Telstra has been testing the wi-fi performance of our modems in our own sophisticated test lab,” the telco said.

“This has served us well and has helped us to develop some of the most advanced wi-fi solutions available to customers.

“However, it’s a highly technical and sometimes theoretical approach, which attempts to simulate the customer experience.

“We have increasingly felt that it doesn’t replicate what our customers are doing at home and how they use their wi-fi devices while going about their typical home activities.

“We felt we were missing out.”

Such a test regime is also likely to have been of significant interest to NBN Co, which has had a long-held interest in the extent to which in-home wiring and home networking degrades the performance of broadband services it delivers to homes.

Research by the Australian Communications and Media Authority last year found the worst modem-routers bundled with NBN services struggled to get past 50Mbps wi-fi speeds.

Telstra’s tests took that further by looking at what walls - and select appliances - did to the wi-fi.

“For wi-fi to reach the other side [of the test house] it had to go approximately 26 metres and get through a number of walls made from plasterboard, single and double brick which all reduced the wi-fi signal,” Severin said.

“We [also] tested the impacts of ... how interference from common household items such as microwaves, baby monitors, fridges and other wi-fi devices such as mobile phones could stop our customers from using their wi-fi the way they want to.”

In the past, interference from a fridge has been found powerful enough to disrupt local mobile phone signals - let alone the wi-fi connectivity inside of a house.

Telstra said it felt “privileged to be able to walk in the shoes of our customers in our wi-fi test house”.

“We believe we are the only internet service provider in Australia that has a dedicated wi-fi test house,” Severin said.

It is continuing to work with the CSIRO, “using the test house for wi-fi device testing to further understand the challenges our customers face, including the growing number of connected devices in the home, as well as the increasing expectations of wi-fi performance as more and more of us rely on our home networks for work, school and entertainment.”