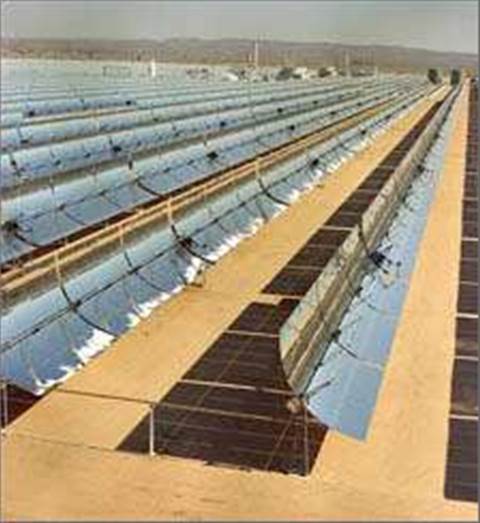 The cost of electricity generated by solar power cells is falling so fast, it is likely to provide a serious alternative to the national grid within five years, according to researchers at the UNSW, who recently broke the record for solar panel efficiency.

The university demonstrated that solar cells are now capable of converting 43 percent of the sunlight hitting them into electricity.

However, the demonstration did not use regular silicon-based solar cells, which are much cheaper and more likely to be in popular use.

Rather, the demonstration cells require sunlight to be split into five different frequencies, or 'colours', with each colour sent to a different cell.

In contrast, the efficiency record with regular silicon-based solar cells stands at just 25 percent, according to Professor Martin Green, research director of the UNSW ARC Photovoltaics Centre of Excellence.

Describing the breakthrough, Professor Green told iTnews that as the intensity of light is increased, the efficiency of the demonstration cells improves.

To break the record, researchers had to focus the sunlight onto the cells, in a similar fashion to the
Solar Power Tower in southern Spain.

"We had five cells all together in combination ... and the sunlight was also focused. You would have a large field of mirrors and sunlight would hit the central tower where 'fancy things' would happen - the light would be split into its different colours and the different colours would be sent to the right cell, which would convert it most efficiently. That is the way this type of technology might be used," said Green.

However, the researchers concede that the technology is unlikely to be used by companies to power facilities like huge data centres.

Data centre operators concerned about increases in electricity costs and shortages of power supply had the long-term option of installing solar panels on their facilities to augment grid supplies.

The solar cells in the UNSW demonstration would require mirrors to 'track' the sun throughout the day, which requires expensive motors and associated maintenance costs.

"I think the industry will concentrate on the lower cost option [of existing cell technology]. Even though the efficiency isn't as high, you don't have some of the other costs involved.

"Keeping the mirrors clean tends to be a problem when you concentrate the sunlight whereas in the normal solar panels it doesn't matter if dust accumulates on them because most of the light will find its way through but if you are trying to reflect the light, dust will deflect the light in the wrong direction and you can't focus it to the same extent," Green said.

Moore's Law for solar cell efficiency
The solar panel industry seems to be tracking a general rule where doubling the production volume reduces the price by 20 percent, said Green, who predicts that current production volumes indicate that electricity generated by silicon-based solar panels will cost the same as that generated by coal-fired power stations within five years.

"It is getting close to what is being called 'grid parity', parity with grid electricity prices. For someone running a company, all they have to do is show they will pay less if they install solar panels than paying the power company for the next 20 years.

"It is a different way of paying for your electricity if you have to finance it up front but on pure economic grounds, there is no argument against using photovoltaics compared to buying power from a power company," he added.