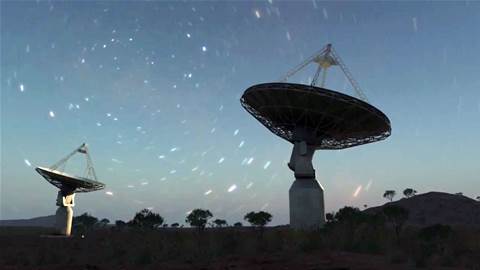 The first radio telescope in the Australian SKA-Pathfinder project is up and running and has detected its very first radio signal, which was transmitted by an Optus satellite. CSIRO says the antenna performed better than expected.

The Australian SKA-Pathfinder, which is also known as ASKAP, will eventually comprise 36 identical dish antennae, each of which is 12 metres wide and 18 metres high. Each is mounted on three moving axes, allowing them to rotate in unison with the sky.

By 2011, CSIRO expects to have six operational antennae. By 2013, all 36 of ASKAP's antennae should be in place at the Murchison Radio-astronomy Observatory in WA. Australian scientists claim ASKAP will generate more data in six hours of operation than has ever been collected in the history of radio astronomy.

The CSIRO hopes the that the $100m ASKAP project will convince international collaborators to choose Australia to host the 1.5bn Euro Square Kilometre Array in 2013, which will comprise 4,000 antennae, be 50 times as sensitive as any other radio instrument ever created and survey the sky ten thousand times faster than has been possible.

Thanks to Swinburne Astronomy Productions and CSIRO for permission to use the images.