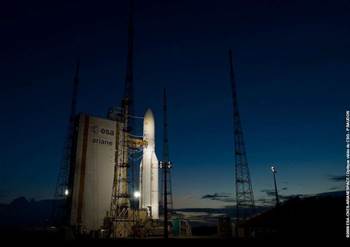 Optus' D3 satellite successfully entered orbit over the weekend after lift-off from the Arianespace facility in French Guiana.

The satellite will increase Optus' fleet capacity by 30 percent and provide an in-orbit redundancy capability, the telco said.

It also marked the first use of the broadcast satellite service spectrum band in Australia.

The band, allocated space between 11.7 and 12.2 GHz in Australia and Asia, will enable broadcasters to increase delivery of digital and high-definition TV signals into homes, Optus wholesale and satellite managing director Vicki Brady said.

The D3 was one of two satellite payloads attached to an Ariane 5 rocket, which was designed to propel spacecraft into low-Earth orbit.

The other satellite on-board was the JCSAT-12, operated by the SKY Perfect JSAT Corporation of Japan.

The Optus D3 satellite, which weighed 2500 kilograms at launch, was injected into orbit 34 minutes after lift-off. It was the sixth satellite lofted by Arianespace for SingTel Optus.

Optus D3 is equipped with 32 Ku-band transponders, and will be located at an orbital position of 156 degrees East.

It was manufactured by Dulles, Virginia-based Orbital Sciences Corporation, and is based on the company's STAR spacecraft bus.