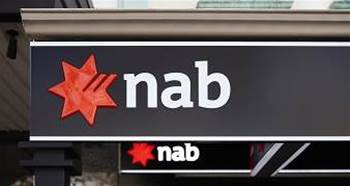 It’s the chart some executives at the National Australia Bank (NAB) now probably wish they had never included in its financial results slide deck: outages.

Despite a box and dice effort to replace legacy mainframe infrastructure with contemporary and public cloud – or perhaps because of it – the number of ‘critical’ incidents suffered by NAB customers fell by just one, from seven to six in its latest half year results (FY 20).

It's an unenviable figure that, if averaged out, still stubbornly sits at one critical incident a month when compared to the same period last year.

NAB's outage hasn’t been that high since the first half 2016, with NAB previously successfully driving down the number of critical incidents until a year ago, when the number of outages roared back to life, much to the frustration of customers and staff alike. 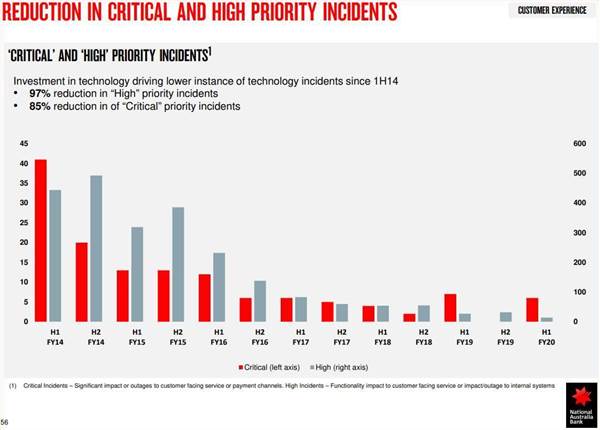 With new-ish chief executive Ross McEwan a known stickler for uptime during his previous role as head of retail for the Commonwealth Bank of Australia when it transitioned to a new core, online availability is certain to be top priority with branches shuttered for the time being.

There’s no doubt infrastructure renewal and software development has been moving apace at NAB over the past year, with the write down of more than a $1 billion in software capitalisation just ahead of Monday’s results testament to its heavy embrace of opex-based cloud.

To what degree the heavy push to put applications in the cloud are responsible for the returned higher rate of outages is debatable, especially as NAB has some of the most notoriously complex business structures systems that have been sweated for years, silos McEwan is now trying to collapse.

The approach is a standard digital modus operandi: build fewer things and build them better and simpler to serve more people – rather than sub-optimal bespoke builds for all and sundry.

Known for being a straight talker, McEwan on Monday publicly needled NAB’s previous corporate culture saying the bank needed to be simpler, with less bureaucracy and staff given the tools they needed to succeed: essentially product and technology.

While it might easy to question whether the resurgence of NAB’s higher critical outage levels happened because of the Reserve Bank of Australia’s new mandatory outage reporting regime aimed preventing outage obfuscation, NAB recorded a commendable milestone in last reporting period.

The bank, for the first time in six years, actually chalked-up zero critical outages in H2 FY19, a feat that went largely unnoticed thanks to management turmoil.

Except perhaps at the RBA, which will be even keener to ensure uptime for payment systems and online banking starts to improve rather than deteriorate now that Australia is in lockdown and people are being discouraged from using cash.

The zero critical incident figure will also help flatten the average number of incidents when whole years are taken into account.

Outages aren’t cost free either, with NAB shelling out $7.4 million in customer compensation in 2018 for an outage in May that year that left thousands of businesses unable to trade when payment systems were hit.