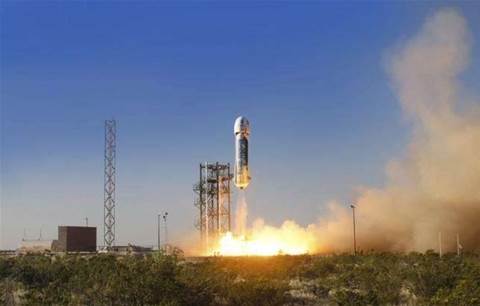 The New Shepard vehicle blasted off yesterday from Blue Origin’s test facility near Van Horn, Texas, and rose to an altitude of 93 km before the capsule separated and parachuted back to Earth.

“Any astronauts on board would have had a very nice journey into space and a smooth return,” Bezos said in a statement.

The descent of the liquid hydrogen and liquid oxygen-fueled rocket, however, was not successful.

“We lost pressure in our hydraulic system on descent,” Bezos noted. “Fortunately, we’ve already been in work for some time on an improved hydraulic system ... We’ll be ready to fly again soon."

Blue Origin is among a handful of companies developing privately owned spaceships to fly experiments, satellites and passengers into space. Like Virgin Galactic, a US offshoot of Richard Branson’s London-based Virgin Group, and privately owned XCOR Aerospace,

Blue Origin is eyeing suborbital spaceflights, which reach altitudes of about 100 km as a stepping stone to orbital flight.

Boeing and privately owned Space Exploration Technologies, or SpaceX, both of which have financial support from NASA, are skipping suborbital flight and building space taxis to ferry crews to and from the International Space Station, which flies about 418 km above Earth.

Blue Origin also is working on a more powerful, methane-burning rocket engine that has attracted the backing of United Launch Alliance, the Lockheed-Martin/Boeing partnership that currently flies nearly all of the US military’s satellites.

Blue Origin, SpaceX and United Launch Alliance are all developing reusable launch systems in an effort to cut costs.

The capsule is designed to fly three people and/or a mix of passengers and payloads to suborbital space. Blue Origin has not yet released pricing information.