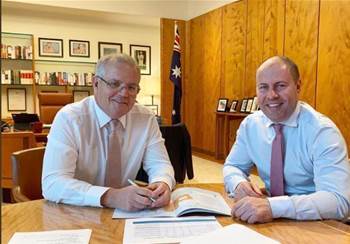 We're from the government and we're here to help.

A personal crusade of Prime Minister Scott Morrison, the clearance of API-powered competition reforms is certain to trigger a race between competing institutions to get their product and CRM systems rapidly up to scratch to comply with the laws.

The result of a concerted push by the Productivity Commission and the Australian Competition and Consumer Commission, the new laws are intended to exert consumer pressure on Australia’s banking oligopoly and the telecommunications and utilities sectors by letting customers put their accounts up for transparent contestation.

“The laws give consumers more control over their data which will help with the development of better and more convenient products and services that are customised to individuals’ needs,” the Prime Minister said.

“Open Banking will also give consumers and small businesses the power to require banks to provide safe and secure access to that information to trusted third parties so that these parties can use the latest technology to provide consumers the tools to make more informed choices as to how they spend their money.”

In a key development on Thursday, Labor backed the legislation after extracting a so-called ‘right to delete’ concession that will create a regulation intended to let consumers instruct businesses to purge their systems of personal data once they cease being a customer.

Labor’s Shadow Assistant Treasurer and Shadow Minister for Financial Services, Stephen Jones, described the tweaks as a ‘big win’ that would “give Australian consumers an “off switch” when it comes to data sharing.”

“This means that they will have the power to determine when a company should no longer hold their data,” Jones said.

Prior to the election Labor had indicated it would junk the CDR laws if elected. Consigned to opposition, the revised thinking now appears to be that some tactical concessions to the government on electorally popular initiatives could be prudent.

While Labor is trumpeting the deletion tweak as a victory, many banks viewed the right-to-be-forgotten mechanism as an ultimately necessary addition to the laws to allow them to inter-operate effectively with Privacy Legislation.

While major institutions like CBA and Westpac – the latter which has invested around $200 million on data initiatives preparation for the CDR – are poised to go in early and hard to snap-up customers with itchy feet, other institutions are likely to compete with sweeteners.

The two most prized markets covered by open banking are mortgages and transaction accounts linked to credit cards from which generate interest, interchange fees and administration fees.

While mortgages are more prized by banks because they are sticker and provide longer term revenue, unsecured lending has quickly emerged as a data hot spot because products and access to credit have lower barriers to entry for consumers.

The initial scramble for accounts necessarily boils down to three key factors: price, customer experience and the ability to orchestrate other bank services into coherent mix via APIs.

For example a customer in their early 30s with a good repayment history that has two credit cards with a combined $20,000 limit, a $30,000 car loan with $20,000 and cash balance of around $10,000 a month earning $80,000 a year would be a prime target because of their near-term potential to consolidate loans and then access the housing market.

Ironically, some analysts believe that it’s banks and providers that have done the initial heavy lifting on CDR that could be first exposed to customer churn because their customers’ data is simply more visible.

And while banks financial services providers have all made big ticket investments in customer and data analytics, the underlying systems – like core banking, mortgage and cards – that feed data up are not always as developed and consistent, as illustrated by the patchy integration of the New Payments Platform.

All eyes will also be on National Australia Bank which was the only institution not to trumpet its readiness for the open banking regime when the deadline for credit and debit card, deposit and transaction account data to be ready hit on July 1, ironically before the CDR legislation had passed.

Have you ever been experienced?

Some of banking’s biggest players appear to be moving pre-emptively to shore up their customers, with the CBA this week taking the covers off the fourth version of its banking app.

While the CBA is one of the more conservative lenders in the market, the institution has made a headlong push to assert itself as the bank-tech front runner in terms of customer experience, especially on mobile, and back-end integration.

Features of the app revealed this week included the potential for what CBA’s retail chief Angus Sullivan referred to as ‘behavioural economics’ – better known as nudge theory – to let customers set goals like savings targets or spending limits augmented by the app.

CBA’s head of digital, Pete Steel also revealed the CBA intends to use the data infrastructure the app is built on the let its customers hunt, apply for and claim applicable government rebates and allowances, possibly not what Treasury initially had in mind when it kicked over the open banking idea.

The CBA estimates it now has around 200 machine learning modes and 157 billion data points.

Andrew McMullen, CBA’s chief analytics officer said there were now 20 million calls a day to the CBA’s customer experience engine, a figure the bank expects to scale as high as 3 billion.

Meanwhile, CBA’s competitors will all be trying to do something similar.