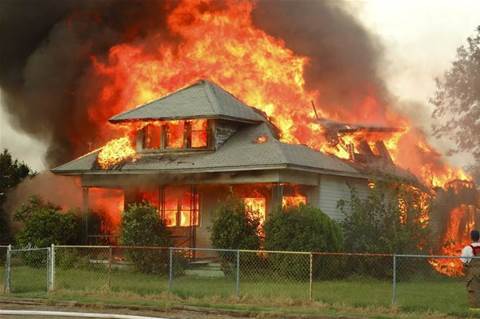 “Not able to provide the market with reliable guidance”.

Trading in LandMark White’s shares were again placed in a halt at market close on Tuesday after it was told beleaguered shareholders the CBA, NAB, ANZ, Bankwest, Bendigo and Adelaide Bank, Suncorp, HSBC and Latrobe had all pulled their business.

It comes after the disclosure of a second exfiltration incident the company insists is not a notifiable data breach under privacy laws.

The CBA had previously come to the rescue of the company, helping it clean up the fallout from the previous data breach.

LandMark White’s chairman Keith Perrett has defended the disclosure over the latest incident, accusing the alleged perpetrators of the document exfiltration of deliberate sabotage and referring the matter to police.

But the bad news has clearly been too much for major institutions to stomach with the resulting walkout now putting a big material question over where the company goes next.

“The resulting loss of revenues will have a material impact on the performance of LMW but LMW is not able to provide the market with reliable guidance at the current time as it continues to work with the clients to establish a roadmap and timeline for lifting of the suspensions,” the company said in its ASX announcement.

“As previously communicated, we do not believe that this [the second incident] constitutes a notifiable data breach for the purposes of the Privacy Act 1988 (Cth) and the Notifiable Data Breaches Scheme as there is limited private information contained in the documents.”

The question for major institutions is whether they are prepared to again help the targeted company off the floor or will seek to cut any further potential reputational losses.

A logical possibility is that deep value investor could enter the fray to engineer a turnaround and attempt to reset relations with major institutions.

LandMarkWhite said in its statement that it expects to lift the current trading halt on Friday pending a further announcement.

Shares in the valuation data company have collapsed from 43c in February to just 18c on Tuesday leaving it with a market capitalisation of just $15.3 million.

Shares in LandMark White had traded as high as 75c in 2017 after a strong run of growth for around five years fuelled by a surging residential property market.

Like the whole cash lending rate, the company’s share price now sits at record lows and could go lower yet.