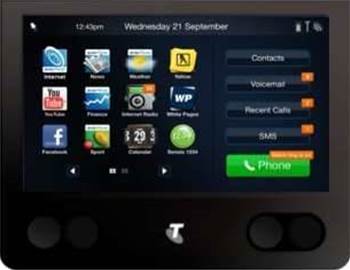 But will users do online banking from the kitchen?

The T-Hub is a wireless touch-screen device, linked to a Telstra fixed line and BigPond broadband service. It is expected to be launched into the Australian market within two weeks.

Rocky Scopelliti, general manager, industry development of financial services with Telstra Enterprise & Government, revealed all of the big four but ANZ are working to offer online banking via the T-Hub at launch.

Scopelliti said the T-Hub is primarily a communications device that will eventually offer video calling and a range of information and entertainment services.

"More importantly, it's a device that our research indicated was critical for all of the activities that happen around the kitchen." 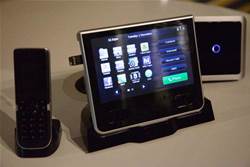 Telstra is hoping the T-Hub will help stem the decline in its fixed-line revenue, and is betting on what it calls a "fourth screen" that will offer always-on Internet access in a highly trafficked area of the home.

"This is a whole new category of wireless device" said Scopelliti, arguing such devices might help boost online banking use.  Scopelliti says Telstra's research found that of the top 30 services that customers sought through the device, "Internet banking was one of the highest".

Westpac head of consumer online Ean van Vuuren confirmed the bank is testing its iPhone application for the T-Hub, but said it is yet to decide whether to proceed.

"If we don't have to do major surgery to the app then we'll do it," he said. "It will be interesting to see what space it occupies given you can't take it out.

"[But] if customers are using it then yes, we will want to be there."

Oliver Weidlich, director of design and innovation with usability consultancy Mobile Experience, said the challenge for banks is to offer a consistent experience across an increasing range of channels and devices.

With the T-Hub, Weidlich said customers will not want to re-enter account details, particularly since it's a device designed to be used by multiple family members.

"If there are four users, can I just switch users and put my PIN in? I don't want to have to re-enter account details every time," he said.

Weidlich said although people are becoming more familiar with touch screens, he's not yet convinced Australians are ready for an in-kitchen device.

Scopelliti said financial institutions need to start thinking about how they can communicate with customers via devices that are always on and always connected to the Internet.

"It provides a back channel of always-on interaction for a financial institution that wants to email, SMS or communicate back to customers."

Weidlich said tools that deliver financial information beyond the basics of Internet banking are more likely to deliver value to T-Hub users. For example, he said, ANZ's Money Manager account aggregation service - which provides data from a range of institutions a customer banks with - would be of more value to a family using the T-Hub.

ANZ did not respond in time for deadline.