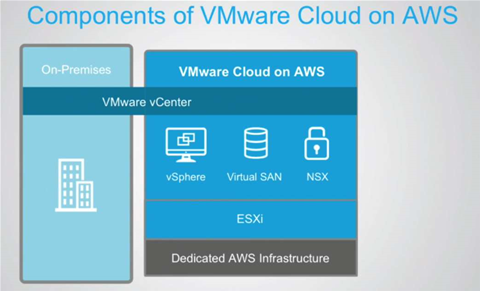 Expected to be ready by mid next year.

VMware today confirmed rumours that it will put its vSphere cloud service on Amazon Web Services for enterprise customers who want a hybrid cloud computing solution.

Known as VMware Cloud on AWS, the service was jointly engineered by the two partners. It puts VMware's software defined data centre on the AWS cloud and enables customers to run any application across vSphere private, public and hybrid cloud environments.

VMWare's VSAN and NSX will also run on the AWS cloud, and the VMware Cloud on AWS service will be optimised to run on dedicated, bare metal AWS infrastructure.

The companies claim the service offers seamless integration between VMware virtual machines and AWS services such as storage, databases and analytics, along with workload compatibiliy between the data centre and the Amazon cloud.

Customers can continue to use VMware tools such as vCentre for virtual machine management and vMotion for moving apps from on-premises to cloud and back, the company said.

The service will be available from and managed by VMware, not AWS. It will be billed on an on-demand basis, and will be elastically scalable, the company said.

Although VMware and AWS showed off the cloud service on stage today, with storage company Western Digital and network equipment vendor Cisco as anchor customers, VMware Cloud on AWS is not yet ready for release.

VMware expects to kick off invite-only betas by the beginning of next year, with full availability of the Cloud on AWS to arrive by the middle of 2017. The company did not provide an exact date, nor did it say when VMware Cloud on AWS will be available for Australian customers.

Today's announcement is a further move by the virtualisation giant to extend its business into the public cloud.

In January 2015, VMware vCloud Air customers were given access to a range of Google Cloud Platform services. Its vCentre virtual management console already supports AWS to a degree.