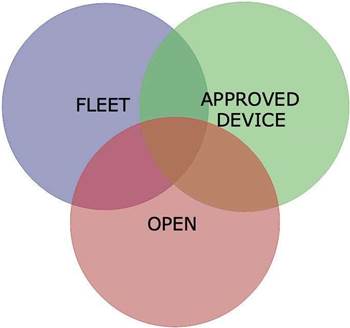 Late last week we published the theoretical model via which we intend to determine the true cost of BYOD programs.

What I'm trying to do over the next eight weeks is to use reader and audience feedback to determine the annual per-seat cost of enterprise mobility solutions. I'm keeping a blog here on iTnews and holding roundtables at each of VMware's 'Touch Tomorrow' events around Australia and New Zealand.

Based on feedback I've received so far, I can say one thing definitively: there are very few organisations using the 'fleet', 'approved device' and 'open' approaches to enterprise mobility I put forward..

Most large IT shops, I was told, are using all three.

Even those organisations with IP to protect - those that mandate the 'fleet' approach in the name of security - tend to be more accommodating when the CEO or members of the board insist on using an iOS device they’ve brought from home:

“The important people tend to get what they want.”

I’m also hearing some concerns that the 'open' model offered by some organisations might result in unrealistic expectations from their own end users.

“In some of the banks they seem to be following a fourth model: “CLIENT CHOICE GONE MAD.”

But thankfully on the whole, the feedback suggests the three models do work as a theoretical basis for determining BYOD costs.

Last week, Peter Alexander, CIO at Australia's Department of Treasury, recommended I represent the models in a three-circle venn diagram, as I’ve dutifully done below: 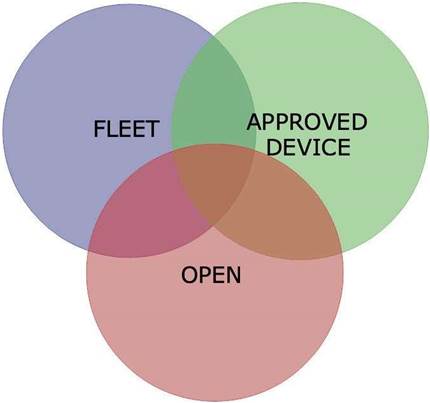 “In a lot of organisations you might have a BYOD model with all three models in operation," Alexander said. "What you are likely to find in the more advanced organisations is staff being given the choice of a prime device via the organisation’s fleet purchase, a selection of preferred alternative devices that might offer much the same access, and BYOD devices that offer a different level of access and a different interface to the information.”

Further, it was generally agreed that three devices was the appropriate number for costing the approved device model. But if your organisation is offering a far greater number of approved devices, I’m keen to hear from you.

In my last post I asked for some help narrowing the scope of who I am writing this report for. Do I look at discounts applied for procurement at little over 1000 staff or for organisations with tens of thousands of staff?

I’m still struggling with this one. Even at an organisation the size of DEEWR (2000), only 17 percent (around 350) of staff have taken up a BYOD option to date. At Fortescue Metals it's only around five percent.

That said, Rio Tinto has 4000 users on a BYOD plan! Some more guidance from readers would be helpful.

One change I will make to the model, however, is the length of time users might be expected to find a new tablet, smartphone or laptop useful.

The days of holding on to a Blackberry for three to four years, I’m told, are well and truly over. These days, an investment in whatever tools you require to manage enterprise mobility might need to scale over two or three consecutive handset releases.

On the Android and iOS front, new devices and software are spinning out at rapid speed - which is largely the reason we have this challenge in the first place.

The steadier pace at which Microsoft and Apple release desktop operating systems is a little more comfortable. According to IDC, the average lifespan of a laptop is between three and 3.5 years. (Many organisations sweated that out to five years over the global financial crisis, but things appear to be getting back to normal).

In any case, four years is most definitely still too long. As Fortescue Metals CIO Vito Forte said so succinctly:

“If you’re hanging onto kit for longer than two years, it's no wonder your users want BYOD.”

The tablet market is still a bit too fresh for IDC to have any numbers, but analysts guess it will sit somewhere between 36 months and two years, based on what they know about laptops and touch screens.

So in sum, it's more likely you’ll replace your smartphone every 18 months and laptop every 36 months, but for the sake of mathematical simplicity, I’m going to average them out at two years for both (unless there are any objections.)