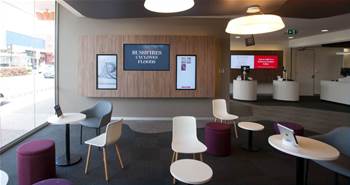 Australia's economy might still be in lockdown, but when it comes to bank technology there's still double digit spending growth as institutions pivot to cope with the pandemic.

The nation's oldest bank, Westpac, on Monday booked in a respectable 12 percent boost in technology spend, as the institution hit the accelerator on bank-wide upgrades of its heavily sweated systems that ultimately blew a $1 billion hole in profits courtesy of regulator AUSTRAC’s action.

Westpac on Monday bowled up what it described as “disappointing earnings” to deliver a H1 FY 20 cash profit of $993 million, a whopping 70 percent decline that was book-ended by the deferral of any interim dividend on the back of remediations and COVID-19.

The sheer size of the AUSTRAC crater took the gloss off an otherwise skilled and adroit pivot by Westpac to maintain smooth operations as 22,000 staff went to remote work on the back of a major Microsoft upgrade to Windows 10 and Microsoft 365.

Westpac also finally delivered Apple Pay to customers, with eftpos functionality embedded, the last major bank to offer the payments service because of what’s understood to have been complexities surrounding its Hogan core banking system.

Westpac pegged its tech expenses at $1.277 billion for the half year, a year-on-year increase of 12 percent over $1.139 billion at March 2019, but it was how the bank spent-up to extract major productivity boosts that stood out.

Data processing costs moved up 16 percent to $44 million for the first half, down from the previous half’s spend of $45 million, but well up year-on-year over $38 million compared to last March.

The elevated figure suggests that Westpac’s infrastructure is now chewing through a far greater number of automated and digitised transactions, including platforms like Panorama and its customer service hub that includes home lending.

The ability of banks to be able to digitally triage disrupted and distressed lending customers is critical for banks in the COVID-19 crisis because it affects their line-of-sight in terms of the state of their lending book and making provisions.

Importantly, costs for technology services – think outsourcing and contractors – continued to fall in double digits to land at $348 million for the half. Notably technology services costs fell 14 percent compared to both Mach 2019 and September 2019.

The laser-sharp focus on IT services costs suggests strongly that Westpac’s relatively recently appointed chief information officer Craig Bright is coming good on his mission to realign local software vendor pricing and shave back the premium many apply for contracts outside the US.

That was also reflected in Westpac’s software costs, which only edged up marginally despite very solid upgrade momentum and the deployment of new and automated platforms.

Software maintenance and licence costs landed at $193 million for this March, up 4 percent over both last September ($186 million) and last March ($185 million), a disciplined performance given Westpac’s historical challenges overcoming legacy infrastructure.

Westpac’s IT shop certainly came out a winner in the eyes of new chief executive Peter King, who suggested strongly the giant remote working push had taught the bank how distributed a workforce could be, especially when key applications and compute are in the cloud.

“We've certainly had a lot of people learn how to work from home [and] a lot of managers learn how to manage workforces that are distributed,” King said.

“We've got some great technology now that we've recently put in Microsoft 365, and collaboration.

"Our IT team have done some great work to get that in, and get the network capacity up. So there certainly is the opportunity, I think, to have a more distributed workforce.”

Questioned on the effect that may have on commercial property and ways of working, King was frank, adding that whether it was working from home or branches, things will be different now.

“I think that's all on the table,” the Westpac CEO said.