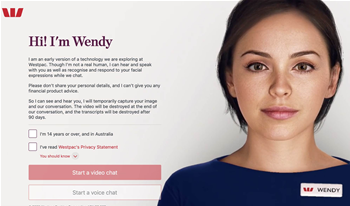 Westpac has unveiled an "early version" of a ‘digital job coach’ called Wendy that allows first-time job seekers to get advice from a human-like avatar using technology by NZ start-up Soul Machines, IBM and Google.

The bank unveiled Wendy over the weekend, which it said is the result of six months of work.

"Wendy’s ability to 'think' is powered by IBM Watson’s AI conversation engine, her 'listening' and 'speaking' skills use Google Cloud Services, and her lifelike, perceptive appearance [was] created by fast-growing New Zealand-based start-up Soul Machines," Westpac said in an article in its internal publication Westpac Wire.

“Finding your first job can be overwhelming - what do I wear, what do I say, where do I search are all questions that increasingly younger people have to deal with,” Cammaroto said.

"We can provide support beyond text and with no perceived judgement - an area that our research has highlighted as an issue.

“We will continue to evolve Wendy into more areas of help so keep watching this space.”

Other Westpac technology staff indicated Wendy is likely to expand into financial education at some point in the future.

Westpac said Wendy's appearance and manner is the result of considerable research, analysis and workshopping with focus groups.

Users accessing Wendy are told not to share personal details.

It asks users to consent to being at least 14 years old and based in Australia.

Tests by iTnews found Wendy unable to offer much advice to help us secure a job in technology or IT.

“I mustn’t have been taught that yet,” she eventually proffered. “I’m always learning new things and I hope to answer your question in the future. Until then, here’s what others have been asking me.”

Wendy did offer to help us “learn about tax” (which, she conceded, “might not feel as exciting as skydiving”).

And to the suggested utterance, ‘Tell me a random fact’, Wendy tried to steer us in a different career direction.

“Ten years ago, being a content creator was barely considered a job," she said.

“Now, thanks to social media, it’s a realistic opportunity to make a career out of your passion. It doesn’t even take much to get started either.”

Pressed on whether a content creator role at Westpac was possible, Wendy competently described a typical recruitment process one might expect when applying for a corporate position.

Westpac consumer bank innovation lead Annie Shu told Westpac Wire that a team of "around six [people is] analysing Wendy’s conversations, training her to respond and finessing her vocabulary."

“It requires the right people to help guide her, and we’re conscious of training her in the right way to ensure she is ethical and avoid AI bias when training her," Shu said.

"It's almost like raising an infant. The minute they are born, they know absolutely nothing.

"Every aspect of what Wendy sees, what Wendy hears, what Wendy talks about, needs to be trained, and trained correctly so she learns and grows the right way. But the pace of her growth is really exciting.”