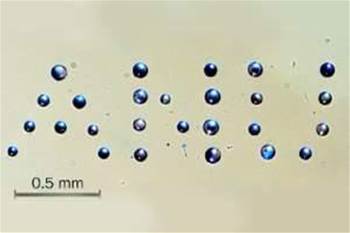 Canberra physicists have developed a 'vortex beam' capable of carrying a tiny bead of glass 1.5 metres along its axis.

Using a five-watt laser, the team generated a hollow, donut-shaped beam and manipulated its direction with a mirror.

Particles within the beam's dark core would heat up and be repelled whenever any part of its surface came in contact with the light, in accordance with photophoresis.

The beam could thus trap 100-micrometre-wide beads of nanofoam and hollow, graphite-coated glass shells within its core and place them 0.5 metres away with 20-micrometre accuracy.

To demonstrate the beam's accuracy, the researchers deposited 26 beads - each roughly the width of a human hair - on a vertical board at that distance to spell out their university's initials: ANU.

According to ANU professor Andrei Rode, the technology could be used to transport particles up to 10 metres before being limited by laser power and laser beam divergence.

It was labelled by US media as a "tractor beam" - like those used by Star Trek spacecraft - although photophoresis required the presence of air particles and could not work in space.

Rode would not speculate on future versions of the technology, nor the maximum size of transportable items.