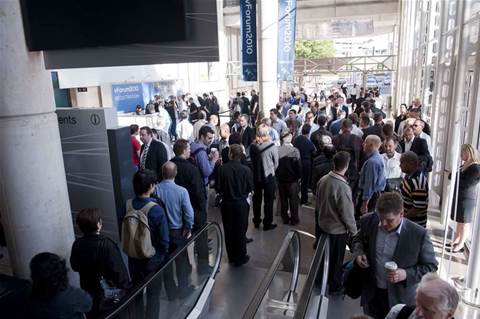 Linked gallery: Photos: All the action from Sydney vForum

A quick wrap of the Sydney vForum.

As technology giants Telstra, Optus and CSC took the stage to discuss their live enterprise cloud computing services at vForum this week, it became clear that discussion had evolved from cloud computing's potentials to the complexities of managing IT in a cloud-delivered environment.

Ken Major, the architect of Telstra's 'Network Computing Services' cloud compute kicked off the conference by putting a dollar figure on what's at stake - a $500 million a year market in Australia, growing at 25 percent every year.

"Within a few short years this is a billion dollar market," he said. "And that's a conservative figure if the Government comes onboard."

Optus, which launched its 'Elevate' cloud in September, pondered where pricing models would move in the future, as the cloud computing market matured.

Parcell said the enterprise market required resources to scale alongside the business' demand, rather than within "pre-determined pools of resources".

Telstra, meanwhile, has refused to make its pricing transparent.

In the future, Parcell said, pricing models would need to evolve to match the differing needs of various market segments. He expected future cloud services to boast multiple pricing models, similar to the mobile market.

"It could be everything from pre-purchase, off-purchase, integrated plans and bundling," he told conference attendees.

As more competition came to market, Parcell also expected a "greater list of features" to be available to customers.

He described for example future cloud service catalogues that might include pre-packaged, IT services such as intrusion detection and prevention or even PCI-compliance - sophisticated IT services that could be launched at the click of a mouse.

Conference attendees asked Optus executives whether the cost of running backup or disaster recovery off a cloud compute would prove cost prohibitive.

Parcell conceded that large volumes of traffic going over the network came at a cost.

Optus customers were using a mix of technologies to alleviate the issue, he said.

Parcell - with his sales hat on - told the audience he was more than happy to sell new network links to Optus Elevate customers.