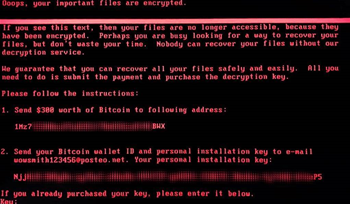 Courier giant FedEx has tallied up the cost of the June Petya malware attack on its TNT Express subsidary, revealing "an estimated US$300 million (A$374 million) impact".

TNT Express was hit hard by Petya, with its parent warning back in July that the damage was substantial with some critical business data and systems being permanently lost.

The company reported overnight that "most TNT Express services resumed during the [first] quarter".

"Substantially all TNT Express critical operational systems have been restored," it said.

When TNT Express was hit, the company had to revert to manual business processes to remain operational.

Prior to the Petya attack, TNT Express was also hit by the WannaCry ransomware but escaped any material damage and losses then.

Both Maersk and TNT Express used the MEDoc accounting software from Ukraine.

Attackers hacked into MEDoc's servers around April this year, and compromised at least three software updates with Petya malware that were then sent out to the firms' customers and infected their computers.

Although Petya appeared at first to be ransomware, security experts soon suspected this was just a ruse, and that the real purpose of the malware was to wipe victims' files and damage data storage.