Telstra was to be offered NBN ops input for cash 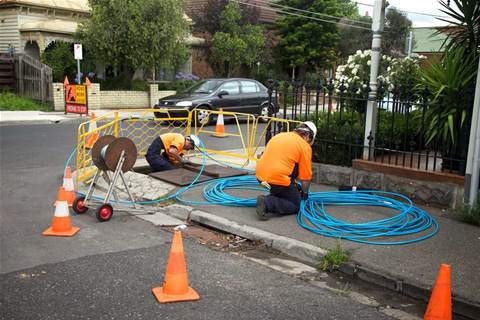 Telstra was set to be offered input into the original NBN rollout and phasing in return for an equity injection, cabinet documents from the time reveal.

Two cabinet-in-confidence papers from 2009 are among a trove found in a locked filing cabinet that was sold off cheaply at an ex-government auction. ABC published part of the trove today.

One of the documents predates the then-Labor government’s April 7, 2009 decision to go it alone in building the NBN - instead of handing the job to a private consortium - by four days.

It shows the government’s buoyancy about the prospects of the NBN project being attractive enough for telcos and other players to buy stakes in it prior to full privatisation.

This vision for NBN Co was for a public/private enterprise with 51 percent government ownership.

However, the cabinet papers show the government was concerned that the telecommunications industry - and particularly Telstra - would buy into the NBN to unduly influence the project’s direction.

Telstra was considered a particular threat - perhaps given the government had sensationally booted it out of the bidding process the prior year - and much focus is given to “talking points” to rebuff its expected overtures.

However, the paper reveals the government was still interested in taking Telstra’s money.

The government indicated it was willing to entertain the prospect of Telstra investing cash or folding in assets, “subject to negotiation and a strict cap on ownership”.

Importantly, the government suggested it was willing to allow Telstra to “participate in decision-making in relation to operations of NBN Co including … where rollout occurs and [the] phasing of the rollout".

This would be allowed if “other government conditions are met and Telstra is willing to participate through equity or assets”.

Telstra would also be allowed to “have a say in the design of the network and use of existing infrastructure”, as long as “NBN Co has ultimate control”.

The paper also reveals that the government believed other retail telcos “may offer NBN Co their assets in return for an equity stake” in the project “if they are concerned about being overbuilt”.

The government believed Optus, Macquarie Telecom and Internode would be among those carriers “looking for influence over NBN Co”.

In reality, the April 2009 announcement of the NBN project caused a rush to consolidate, as providers correctly saw the only option for influence in the NBN ecosystem as being of sufficient scale.

(When Internode sold to iiNet in 2011, founder Simon Hackett said “it would be a dangerous thing to go into the NBN era being only just big enough”.)

The government also thought wholesale transmission operators like Nextgen Networks - now part of Vocus - “will want NBN Co to use their assets either through vending in assets in return for shares; a long-term lease arrangement; or by selling assets to NBN Co”.

Again, this did not materialise.

Some of these operators instead sought to service NBN Co’s 121 points of interconnect (PoIs), allowing them to command some influence over the end-to-end NBN connection.

A second leaked cabinet-in-confidence document points to concerns the government had in ensuring NBN Co was classified as a public non-financial corporation (PNFC), keeping it off the budget books.

The document reveals that the Australian Bureau of Statistics - which oversees classification - had “not been consulted on budget classification issues specifically in relation to NBN”.

Instead, the government of the time appeared to announce the formation of NBN Co based only on “preliminary advice” that the company could conditionally qualify.

Finance and Treasury were left with the job of consulting with the ABS to achieve PNFC status for NBN Co.

The government wound up gaining the status, and as iTnews revealed late last year, it appears almost nothing - including profit warnings by the company itself - can ever trigger a review of that status.