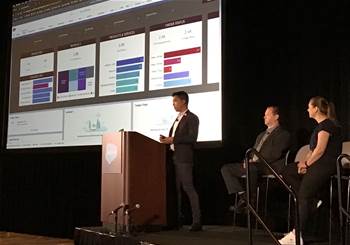 Telstra is using dashboards powered by Salesforce's Einstein Analytics in the central Salesforce system it uses to run its enterprise business.

Kuzmenkova said that Salesforce was promoted internally as “the place to go” to manage all enterprise business, but executing on that was complex.

In January 2018, Telstra licensed Einstein Analytics, a tool within Salesforce’s artificial intelligence suite that, among other capabilities, promises to “connect to outside data sources to see all of your data in one place.”

“Our first use case was to build a ‘customer 360’ view,” Kuzmenkova said.

“We wanted to bring multiple data sources onto the system and we wanted to embed the customers 360 in Salesforce so our sales users had one interface, one tool to provide a great customer experience.”

The customer 360 dashboard went live in June last year, though Kuzmenkova said it was “more probably a 180 [degree view] back then.”

“We've been slowly adding building blocks to allow the 360 view and I can say today we're getting really close to getting that full view of the customer,” she said.

“Getting that 360 view available to our sales team was a game changer. Our sales teams absolutely loved it, and NPS [net promoter score] went up by 80 percent.”

“We had all the information at our fingertips to serve our customers better,” she said.

“It made our teams more productive. They could log in in the morning into Salesforce, open the 360 view and see exactly what is happening to their customers and proactively engage with them.

“Before Einstein, sometimes it would take us two or three days to pull together a view of what our customers actually bought from us.

“We were extracting data from multiple systems, using lots of Excel spreadsheets. By the time the exercise was finished, the data was already out of date.” 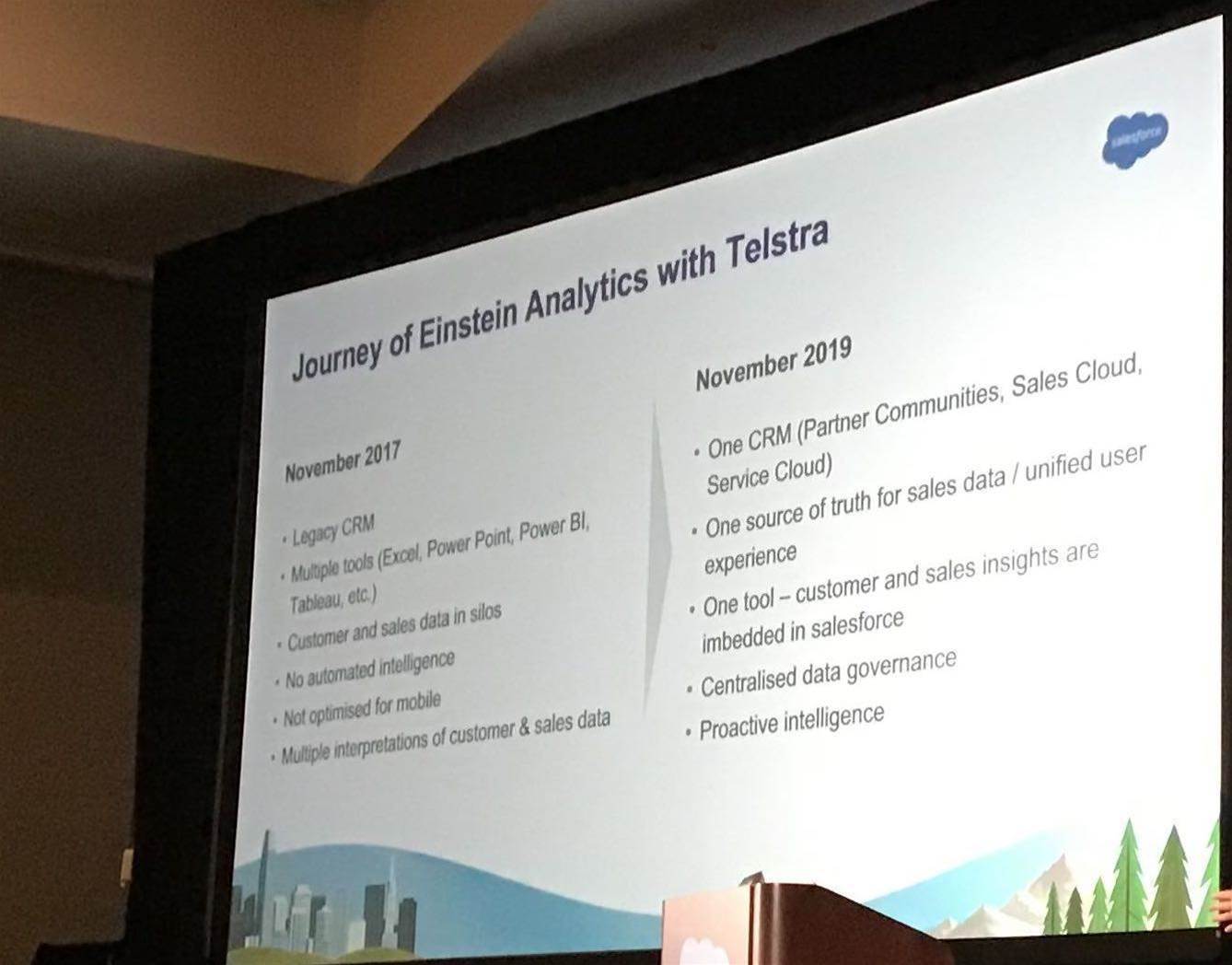 Kuzmenkova said Telstra has around 3500 users of Einstein Analytics across two Salesforce orgs - split by domestic and international customers.

“We [also] have around 900 users on our partner communities that are interacting with Einstein dashboards,” she said.

“We have our partner managers and partners on the same dashboard looking at the same numbers.

They could also drill down to an individual account level to understand what might be causing a particular trend or issue at a higher level.

“Let’s pretend I am a sales executive for Telstra Enterprise in the southern states of Australia,” Lo said during a demonstration of the customer 360 dashboard.

“I can now click a filter to [see] what's applicable to me. I can then filter to my direct reports and see their performance.

“This really helps people with starting the conversation and diagnosing a problem. There may be some issues at a holistic level, but maybe there's specific problems in certain areas as well.”

Sales executives could also use the dashboard to understand the product portfolios and revenue profiles of individual accounts, including “when the revenue will land throughout the year.”

Lo said that involving the Telstra Enterprise sales organisation in the design of the dashboards was particularly important to the project’s success, as was staying close to users throughout the implementation and continually improving the system.

“Getting a strong foundational data architecture is really important as well,” Lo said.

“This is really only going to work if the data is current.”

The implementation team spent time understanding the mechanics of the eight source systems, such as how often data in them was updated and therefore could be pulled into the Einstein-powered dashboards.

That understanding proved important to combating any temptation internally among subsets of users to return to old ways of doing things.

“[Otherwise] you get sales saying, ‘I just changed an opportunity and it's not on my dashboard. It's broken, this sucks, I don't want to use it, I want to use my Excel instead’.

"And then [you need to coax them back].”

Ry Crozier attended Dreamforce 19 in San Francisco as a guest of Salesforce.