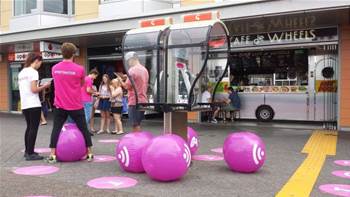 Telstra will offer free wi-fi across 1000 locations from November as it launches a five-year, $100 million plan to build a national wi-fi network.

The telco today said it would use its existing payphones in some of Australia's busiest hubs to pilot the service.

The first 1000 trial sites will include Melbourne's Bourke Street Mall, Sydney's Bondi Beach, Canberra's Civic Centre and Adelaide's Rundle Mall, alongside a number of other locations in Brisbane, Hobart, Perth and Darwin.

Access to the wi-fi will be free for the trial period but will incur charges once the network is officially launched early next year.

Telstra home broadband customers will use their existing allowance to access the network, while non-Telstra customers will be offered a 'daily pass'. A Telstra spokesperson said the telco had not yet decided on pricing for the pass.

Telstra in May announced it would spend more than $100 million to build the wi-fi network of 2 million hotspots, which would be made up of around 8000 Telstra built hotspots and a further 1.9 million access points provided by its customers.

The network will also feature an expected 12 million hotspots outside of Australia as a result of a partnership with wi-fi provider Fon.

Telstra's own 8000 wi-fi hotspots will be located in shopping areas, business centres, transport hubs and community areas, while the telco will encourage its home broadband customers to share a portion of their bandwidth with other Telstra wi-fi customers to make up the remaining 1.9 million sites.

Telstra director of broadband and bundles Stuart Bird said home broadband customers could pre-register their interest in signing up for the network from today.

“As we get closer to [launch] we’ll be advertising that more deeply. It’s important to say that we haven’t advertised this too widely yet aside from a media announcements, so what you can look forward to is some pretty significant press over the coming months on how customers can really get on board,” he said.

Bird said it was too early to tell how much of the carrier’s $100 million budget for the network would be devoted to marketing and promotional activity.

“It’s going to depend on how the trial goes, the feedback we get from this and how the technology works. That’s the important thing about this trial, it’s also to help us test the technology and the range on each hotspot,” he said.