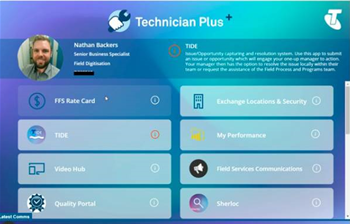 Telstra has created a series of custom apps for its 5000 field technicians that help them complete work, notify problems, record network damage and upsell to customers onsite.

The apps are built using Microsoft’s no-code PowerApps platform, and are part of a broader adoption of Microsoft’s Power platform by the telco’s field services division.

“But when we stopped and looked, we noticed there’d been this massive proliferation of links, url’s, apps and phone numbers, and that actually being a technician at Telstra was quite difficult with all these different systems and processes that you had to follow.”

The telco found that technicians and support staff would create their own lists of links to different webforms they had to use as part of their job, and store them in emails.

Apps and tools had also been created over the years to put out “spot fires” but there was no single place where technicians could view and access them all.

The solution was twofold: adoption of Microsoft’s Teams and Power platform.

Using Teams, technicians congregate under team leaders in virtual channels where they can conduct huddles and video calls.

The telco also created two strategic platforms - Technician Plus and Team Leader Plus - where technicians can see all the apps and tools they need to use in one screen.

These strategic platforms were then embedded within the Teams channels, French said.

“We’ve been able to go and take those Word documents, Excels, and checklists that people do when they go into exchanges, and just put them into a common experience for our technicians,” French said.

“It’s really helped us with things like change management, because we’ve developed solutions now that allow us to then ‘follow the bouncing ball’, [rather than] write huge work instructions [to perform a task].”

The first app to be built was TIDE, which allows technicians and subcontractors to share issues they encounter in the field.

Technicians can view, upvote and comment on the submissions, and that helps Telstra’s operational improvement teams to determine what they should work on fixing next.

“You can get a pretty fair understanding of the scale of the item just by looking at the comments,” Backers said.

“You might have an item that’s been submitted in Sydney but have guys in Western Australia saying, ‘I’m having that issue too’.”

Backers said the success of TIDE gave field services the internal capital to “try and automate and digitise several [other] processes across field services” using PowerApps.

One of the new apps is the ‘FFS Ratecard’, where FFS stands for fee for service.

“What this is is essentially an interactive catalogue that we’re able to provide our customers while our technicians are out on-site of all the additional products and services they can offer," Backers said.

“That’s been really good to help drive upsell opportunities to our customers as well, and we have plans to expand this app to include retail products and also drive lead submissions into our sales team for our sales team to contact customers and upgrade things like mobile plans.

“That’s a capability our technicians previously haven’t had. There’ll be great financial benefits from that.”

Backers said that an existing tool to record network damage - and try to recover costs - had also been reworked in PowerApps under the name Sherloc.

“This is our system where we capture network damages and drive the recovery process, and we’ve seen about $20 million worth of network damages recovered using this tool alone,” Backers said.

“This is specifically used by our technicians if they get called out on-site and there might be a cut cable where an excavation company might have gone through our fibre network.

“Our technicians use this tool to go out there and do an investigation which we then push into our teams to help recover that cost.”

Technicians can take photos, which are then geotagged using an integration with Bing Maps.

“Geotagging information so we can know exactly where that photo was taken by our technicians … is important in the recovery process as well for damages, especially if the customer wants to take legal action,” Backers said.

The app also records the “ticket of work, what was required, and what materials were required to fix the damage,” Backers said.