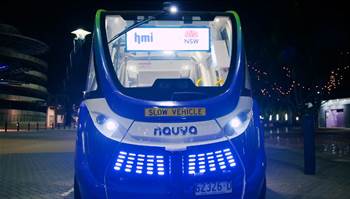 Sydney’s driverless shuttle bus service at Olympic Park is set to become the first in the country to autonomously interact with live traffic conditions.

Over the next six months, the Navya vehicles will communicate with traffic signals at the park to help them navigate intersections to connect passengers with Olympic Park Station, restaurants and carparks.

NSW Roads Minister Andrew Constance announced the new service at the International Driverless Vehicle Summit in Sydney on Monday, where Monash University is also showing off its driverless race car.

Constance said the new stage in the trial will help the state understand how autonomous vehicles can connect to ‘smart infrastructure’ like traffic signals and digital bus stops, with services running every 10-15 minutes on weekdays.

It might also make the experience a bit more engaging compared to the current 'cautious' speeds and route.

“We now have two smart shuttles ‘talking’ to the conditions and infrastructure around them,” he said.

“Customers can get on board and test ride these buses over the next six months to help us gain insights into how autonomous vehicles can improve services and how this technology will shape our future transport.”

NRMA chief executive Rohan Lund added that although the shuttle has become a popular photo opportunity since its launch, the technology could be integral to improving road safety.

“Some 94 per cent of crashes are caused by human error so autonomous vehicles have the potential to save thousands of lives and dramatically reduce congestion on our roads,” Lund said.

The point on congestion, however, has come under debate recently with urban policy researchers at the University of Adelaide suggesting that motorists’ preference for their own vehicle - autonomous or otherwise - may make congestion worse in a similar way to how ride sharing services like Uber have become the biggest contributor to worsening traffic in cities like San Francisco.

But with driverless shuttle trials already underway in a range of settings across NSW, the state is continuing to invest to make sure the integration of the technology runs as smoothly as possible ahead of a planned launch of full-sized driverless buses on Sydney's roads by 2022.

“The Smart Shuttles are just one example of our state’s automated vehicle program which is the country’s biggest,” Constance said.

“We are dedicated to expanding trials to get the technology right, which is why we invested $10 million in additional testing over four years for a less congested, safer and more efficient future on our roads.”