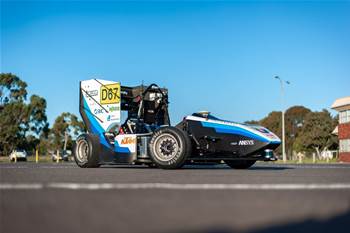 Ahead of international competition.

Over the weekend, the Motorsport team at Monash University showed off Australia’s first student-built, fully autonomous race car to the crowds at the university’s open day.

The driverless M19-D electric vehicle has been in development for over three years, with involvement from over 200 undergraduate students, Monash Motorsport CEO Paras Bhutiani said.

The car is able to detect the racetrack and its surrounding environment in real time, thanks to a combination of LiDAR laser scanning unit, a stereoscoping camera that perceives distance similar to the human eye, and a GPS unit accurate to within 10cm.

Autonomous racing vehicles have been in development globally since early 2016 with the first purpose-built vehicle, Robocar, designed by Daniel Simon, who also designed the iconic light cycles in 2010’s Tron:Legacy.

Since then, a number of other cars have sprung up, with at least three global racing competitions being formed, including the Formula Student race in Germany.

“The talented team at Monash designed and built its innovative and high-performance features to create the state-of-the-art driverless vehicle, which we’re excited to compete with in the upcoming Formula Student driverless competition in Germany next year,” Bhutiani added.

As The Verge noted in 2016, one of the benefits of autonomous race vehicles is that the cockpit space needed for drivers can be turned into extra space for branding.

But for Monash, it’s also a way to introduce students to some of the practical applications of artificial intelligence, computer vision and remote sensing when combined with engineering challenges, Dean of Engineering Professor Elizabeth Croft said.

“Student teams like Monash Motorsport offer outstanding opportunities for our students to develop technical, employability and entrepreneurial skills on a truly international scale.”