Stallman calls for end to ‘war on sharing’ 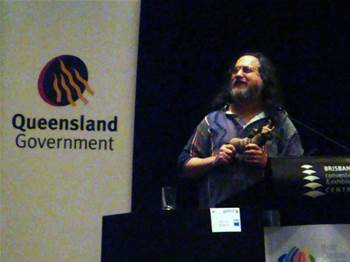 GNU founder warns of threats to a free digital society.

In a keynote presentation at the World Computer Congress in Brisbane on Tuesday, Stallman asserted that digital society had to be "free" in order to be a benefit, and not an attack.

"It may turn out that technology is a huge disaster for society," he said, highlighting its potentials for censorship and surveillance.

He criticised Australian plans to force telcos and ISPs to store browsing and call logs in a similar fashion to the European Directive on Data Retention.

The proposal was led by the Attorney-General's department, which in July claimed that the release of details "may lead to premature unnecessary debate".

Stallman argued that it was never "too early to debate the question of whether the government should watch all of us".

"Often they don't record what people say, but who they speak with," he said about data retention.

"That's enough for them to attack whatever political opposition groups they seek to destroy. No country is safe and immune to the possibility of a tyrant," he said.

Noting that "surveillance is one of the major dangers" to a free digital society, Stallman also criticised government surveillance of cars in the UK.

Censorship was another threat, he said, highlighting Australian ISP-level filtering plans and current penalties for hosting or linking to prohibited online content.

"This is intolerable in a free country," he told local and international delegates. "It's an ugly assault on human rights."

"Digital technology is a platform for convenient censorship ... It's not just China and Iran anymore; we have to fight against censorship wherever we are."

Asserting that a user either controlled, or was controlled by, a program, Stallman said a "non-free" program essentially was an instrument that gave vendors power over users.

The term "free" was not about price, he said. Rather, it required four "essential freedoms": to run software as a user wished; to access source code and compute freely; to distribute the software; and to modify and distribute modified copies of the code.

Stallman called digital rights management (DRM) technologies "malware" that could monitor usage and said they were "explicitly designed to do things to the detriment of users".

Using software-as-a-service (SaaS) was the same as using non-free software, he said, because users did not have access to the source code or executable file.

"SaaS means that instead of doing your computing in your own computer, you do it by sending the relevant data to someone else's computer," he said.

Stallman called for an end to the "global war on sharing", where the use and distribution of software was controlled.

While artists and musicians were "not entitled to" compensation from listeners, Stallman said governments could introduce a tax to support their work.

He had two suggestions. In the first, governments would collect taxes and distribute these resources to authors or artists according to the cube root of their popularity so "fairly successful" artists would be adequately supported.

Alternatively, artists, authors and musicians could use a voluntary payment method that allowed users to donate small amounts at the push of a button.

"A lot of people will push that button because it feels good to support the artist," Stallman said.

"To end the war on sharing is an imperative," he said. "Its goal is bad because sharing is good; sharing is the way we build a society."

Stay tuned to iTnews for a one-on-one video interview with Richard Stallman that will be posted this afternoon.