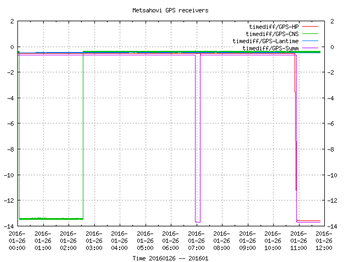 A time spike in the global positioning system which rippled through the world yesterday was caused by a satellite launched in 1990 failing and triggering a software bug, United States officials have confirmed.

The problem was first noted by Metsähovi Radio Observatory in Finland, where an atomic clock measured a discrepancy in GPS timing of 13 microseconds.

Other radio observatories such as Jodrell Bank in Britain and ATCA in Australia confirmed the 13 microsecond error, and speculation rose that it might have been caused by an older satellite, SVN 23, failing and being decommissioned.

Although the timing anomaly measured just microseconds, it could have caused significant navigation errors, Richard Easther, head of the University of Auckland's physics department said.

"The rule of thumb is that for every nanosecond of error, you could be out by as much as a foot," Easther said.

"An error of 13 microseconds or 13,000 nanoseconds works out as just under four kilometres."

The United States Air Force confirmed that the GPS anomaly was caused by the SVN 23 satellite failing.

A spokesperson for the USAF 50th Space Wing at Schriever Air Base, Colorado, said the issue started on January 26 12.49 am local time when verified users experienced GPS timing issues.

"Further investigation revealed an issue in the global positioning system ground software which only affected the time on legacy L-band signals," a spokesperson said.

"This change occurred when the oldest vehicle, SVN 23, was removed from the constellation [of GPS satellites orbiting Earth].

"While the core navigation systems were working normally, the coordinated universal time timing signal was off by 13 microseconds which exceeded the design specifications.

"The issue was resolved at 6.10 am Mountain Standard Time, however global users may have experienced GPS timing issues for several hours."

The 50th Space Wing said operator procedures were modified to prevent a repeat of the GPS timing anomaly, until the ground system software has been corrected. An operational review will also be conducted into procedures and impacts on users.

“No reports of issues with GPS-aided munitions were reported by the US Joint Space Operations Centre at Vandenberg Air Force Base; the US Strategic Command’s Commercial Integration Cell which operates out of the USJSOC, will act as portal to determine the scope of the GPS error for commercial users."

SVN 23 was launched in 1990 as part of the improved Block IIA GPS 19-satellite constellation. When it failed it was the oldest GPS satellite in operation, its 25-year service time well exceeding the 7.5 year life expectancy.