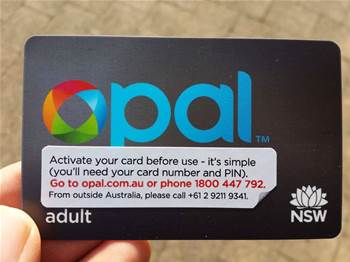 It's no Oyster card.

Sydney residents were first promised a public transport smartcard in the nineties as the city readied itself for the 2000 Olympics.

More than a decade later the Opal smartcard has made its debut on trains.

Opal’s June 14 expansion to include Sydney City Circle trains and the Eastern Suburbs train line follows a trial on a small number of ferry routes which have been Opal-enabled for over 6 months.

Transport for NSW has chosen to roll out the system progressively so it can conduct thorough testing to fix any issues.

Opal is the result of a contract awarded by the NSW government in May 2010 to a consortium of Cubic Transportation Systems, Commonwealth Bank, epay, Parkeon and Downer EDi.

The Opal project will cost more than $1 billion and take three years to roll out due to its complexity.

The contactless Opal smartcard is based on NXP’s MIFARE DESFire EV1.

It was hoped that the expanded Opal trial would be zonal in nature like the paper MyMulti tickets, so users who need to catch different modes of Sydney public transport could do so without penalty.

Unfortunately, the NSW Government’s Opal pricing has controversially opted to keep the paper ticket anachronism where changing modes of public transport in a single journey results in a much higher cost.

Frequent public transport users will no longer be able to prepay for long term tickets such as yearly, quarterly and monthly. However after 8 Opal trial journeys all further journeys will be free for that week and there will be a $15/day maximum cost from Monday to Saturday.

In an effort to reduce congestion, users are encouraged to travel off-peak with a 30 percent train discount if they tap on outside of 7am-9am & 4pm-6.30pm on weekdays and all weekend. Opal use on Sundays will incur a flat fee of $2.50, which allows unlimited travel.

He said those running the Opal project hoped to replicate successful international systems, but hadn’t addressed the underlying mechanics, pricing structures for users and revenue distribution for operators.

“The fundamental problem with trip-based charging is that you penalise users who interrupt their journeys, say to drop the kids at school or do shopping. It detracts from the value proposition of transit for no good reason,” Caldwell said.

He argued by this stage in the Opal project, the future revenue collection approach should be clear.

“Ultimately that is the end game - who pays how much for what. As yet there is no clarity on this end functional outcome, a little concerning for a project with a bit over $1 billion committed spend.

“The question is how does Opal help transit and transit users - does it more equitably link fares to costs, does it make journeys faster and more comfortable, does it encourage transit use in a practical way?

"The objectives that would normally underpin a project like this, like enabling seamless intermodal transfers, are absent.”

“To mitigate against this there is a $15/day cap, but this is really a kludge. A flat cap does not equitably address cost inequities in multi-modal and broken-journeys.

"Even with the $15 cap and pay for four-days and the fifth is free, the prices end up being significantly higher than current multi-modal “MyZone”, and also higher than say commuter tickets in London, where there is generally more than double the level of service.”

Caldwell said the $15 cap would require a geographic limit as well as time limits.

“This is just one of several key areas in which the goal is not clear. The next stage of roll-out hopefully will be very different to the trial approach.

"London’s Oyster card, to which Sydney’s Opal is often compared, defines and caps fares based on geographic zone usage, and so far the government has only committed to eliminate Sydney’s zone system, without explaining how multi-modal fares might be equitably determined otherwise.”

Caldwell told iTnews the current Opal trial pricing structure was not commensurate with either usage or value to the user.

“This is the real challenge, and it has been solved by cities like Hamburg, Zurich, Perth and London by applying geographic zone and time-based fares, rather than trying to figure out how to define individual journeys with breakages and mode changes in the mix.”

Read on for user reviews and the verdict on the Opal smartcard.