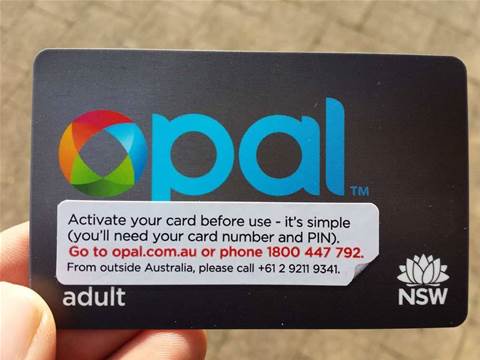 Opal cards can be mail ordered online, by phone or at a Transport for NSW shopfront. The cards will be available through retailers by late 2013.

According to Transport for NSW over 75 percent of Opal card trial users have opted for the auto-reload function when the card’s stored value falls below $10.

Trip details are available online on the Opal website and can be exported only as a PDF.

iTnews tested the card for several days last week and found lagging issues on the Opal online system, giving the appearance the user had been charged a higher fare.

At the halfway point of catching a train from Central to Wynyard during the Friday peak, the ‘Opal activity’ webpage displayed the transaction “Central to unfinished journey No tap off - Default fare $8.10”.

This continued to display for 10 minutes after the card had been tapped off at Wynyard station, when it accurately reflected the “Central to Wynyard - $3.30" journey.

Opal trial users should check the website 10-20 minutes after they tap off to make sure they haven’t been charged the maximum fare.

Technology enthusiast Beau Giles has been an Opal trial user since December when the Neutral Bay ferry trial began.

He said he hadn’t experienced any real issues with the hardware, usage or billing and was excited by the possibility of having useful apps to use with Opal - such as mobile balance checks and transaction history

Giles said he found tapping on/off to be faster than Melbourne’s Myki system, with the system backend between tapping on/off and having it appear online as a transaction reloading usually within 15-20 minutes - a big improvement from the 24 hours Myki quotes.

Opal was an opportunity to completely reboot how Sydneysiders use public transport. Many imaginative approaches could have been used to improve fairness, increase utilisation of unused bus/train/ferry capacity and shift usage from overburdened routes.

Disappointingly, it seems the NSW Government has chosen to keep many of the anachronisms of the paper ticketing system and instead splash on a billion dollar coat of paint.

The only glimmer of hope is a big change in pricing and user incentives as trial feedback is received and the trial area expands over time.