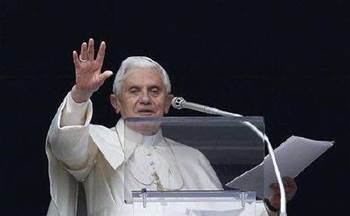 Pope Benedict gave a qualified blessing to social networking on Monday, praising its potential but warning that online friendships are no substitute for real human contact.

The 83-year-old pontiff, who does not have his own Facebook account, set out his views in a message with a weighty title that would easily fit into a tweet: "Truth, proclamation and authenticity of life in the digital age".

He said the possibilities of new media and social networks offered "a great opportunity", but warned of the risks of depersonalisation, alienation, self-indulgence, and the dangers of having more virtual friends than real ones.

"It is important always to remember that virtual contact cannot and must not take the place of direct human contact with people at every level of our lives," Benedict said in the message for the Catholic Church's World Day of Communications.

He urged users of social networks to ask themselves "Who is my 'neighbour' in this new world?" and avoid the danger of always being available online but being "less present to those whom we encounter in our everyday life".

The vast horizons of new media "urgently demand a serious reflection on the significance of communication in the digital age," he said.

The pope did not mention any specific social networking site or application by name, but sprinkled his message with terms such as "sharing," "friends," and "profiles".

He said social networking can help "dialogue, exchange, solidarity and the creation of positive relations" but he also offered a list of warnings.

"Entering cyberspace can be a sign of an authentic search for personal encounters with others, provided that attention is paid to avoiding dangers such as enclosing oneself in a sort of parallel existence, or excessive exposure to the virtual world," he said.

"In the search for sharing, for 'friends', there is the challenge to be authentic and faithful, and not give in to the illusion of constructing an artificial public profile for oneself."

The pope is known to write most of his speeches by hand while his aides manage his forays into cyberspace. In 2009, a new Vatican website, www.pope2you.net, went live, offering an application called "The pope meets you on Facebook", and another allowing the faithful to see the Pope's speeches and messages on their iPhones or iPods.

The Vatican famously got egg on its face in 2009 when it was forced to admit that, if it had surfed the web more, it might have known that a traditionalist bishop whose excommunication was lifted had for years been a Holocaust denier.