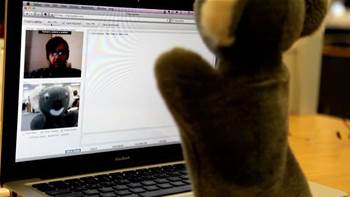 Bid to crack down on indecent exposures.

The founder of online video chat-room sensation 'Chatroulette' has revealed the company has been storing the IP addresses and even taking screenshots of users engaged in inappropriate conduct whilst connected to the service.

Chatroulette, for those unfamiliar, is a site where users are randomly connected to one of the tens of thousands of people also using the site via their webcam and microphone.

As discovered by iTnews' unfortunate mascot Coco earlier this year, the concept caught on among netizens at lightning speed, but all too often users were turned off after being connected to pranksters out to shock or disgust random strangers.

"I believe that Chatroulette was great in the first honeymoon days after it was launched, before it was discovered by a strange people, who started to abuse the true freedom and democratic nature of the service," he wrote on the site's blog, upset at "difficulties raising venture capital", dealing with "negative feedback" and doing what he could to ensure the site was still "legally operating in the United States territory."

Ternovskiy said that he has had a "breakthrough" in dealing with these dramas by applying "the laws of a real world on an internet application."

"We've started collecting information, such as IP addresses, logs and screen captures of offenders who actually break US/UN laws by broadcasting inappropriate content in a specific situations," he said.

"We've captured and saved thousands of IP addresses of alleged offenders, along with logs and screenshots which prove wrong behaviour.

"We are initiating a conversation with enforcement agencies and we are willing to provide all the information we have."