As NBN Co and Telstra continue to nut out an agreement on replacing Australia's copper network with fibre, David Havyatt asks whether the decommissioning of copper will occur smoothly.

Product managers usually only learn on the job that withdrawing a product from market can be as arduous as launching one.

There is always some group of customers who’ve been using the product in a different way to that intended and their needs aren’t met by the substitute product.

Telstra and NBN Co are about to confront this issue with decommissioning the twisted pair copper network. There are plenty of indications that this might not go well.

On the face of it NBN Co seems to be assuming a fairly rapid migration of services.

Exhibits 1.1 and 1.2 from the NBN Co Business Plan show the number of greenfields premises passed and the number of premises in greenfields areas with actual connections. The planning assumption that only 70 percent of houses get an active service enables the derivation of an “implied migration” number, that is number of the homes passed that have either actually migrated or elected not to.

These are graphed below and indicate a migration time of six to nine months. 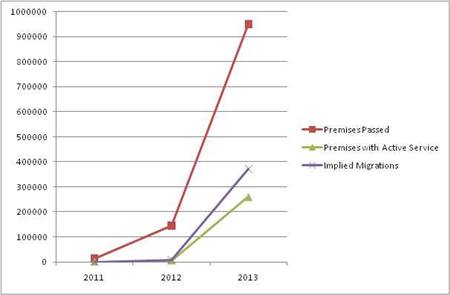 However, the simple graphical representation can be deceptive. Some customers will migrate rapidly, while others will move more slowly. The six to nine months will only be an average migration time.

At recent Customer Collaboration Forums, NBN Co officers referred to the total migration period taking “twelve to twenty-four months.” Part of that time will relate to the tasks of coordinating work between NBN Co and an RSP (retail service provider).

Let’s take the simplest case of a house migrating from a telephone line only to the NBN. The product the RSP will acquire is the 12/1 Mbps service that includes a 150 kbps Traffic Class 1 voice support for $24 per month. Once the NBN Co ONT (client terminal) is installed, the RSP will need to provision the voice service. In practical reality this will probably look just like porting a local number.

This is all easiest if the RSP installer can be an NBN Co installer as well, which is what NBN Co is planning for.

Life gets a little trickier if the user already has telephony and broadband, from different providers. Thankfully broadband doesn’t have the same co-ordination issues at cutover – both services could be working for an overlap period.

Migration of EFTPOS may be harder

Where the task becomes more challenging is where it’s not just a co-ordination issue, but where there isn’t a technology alternative waiting in the wings.

There are two immediate candidates, the first is a host of copper based “public interest” services and the other is EFTPOS.

In its Implementation of Universal Service policy for the transition to the National Broadband Network environment discussion paper, the DBCDE allocated a chapter (3.6) to “Development of a technological solution for transition of copper-based public interest services”.

This chapter discussed arrangements being made to fund Telstra to identify technology solutions for these services, and asked more widely whether there were other services (apart from traffic control and alarms) that should be covered by the arrangements. The Government - at least at this stage - was not completely aware of the many applications the copper network is used for.

Unfortunately we don’t yet know what responses the Department has received. Submissions were due 5 November and the website implied they would be published as received. Inquiries to DBCDE have provided only an assurance that they will be published but no indication of when.

So at this stage we are none the wiser. It is an interesting question of whether there are other services to be considered and exactly what the technical solution might be.

At least the Government has clarified the kinds of “non-addressable premises” which NBN Co is permitted but not required to connect. These were detailed in Attachment A of the Statement of Expectations provided to NBN Co by the shareholding Ministers in December.

Included in that list is “Banking communications (EFTPOS and ATM terminals)”. These services usually are provided in addressable premises but not always.

The provision of EFTPOS services may well be problematic. There are about 300,000 EFTPOS terminals in operation in Australia. Of these about 80 percent are terminals in small retailers, typically dial-up.

There are a variety of terminals in operation. Some of these are simple dial-up terminals sharing the phone line of the shop. The provision of NBN services should at least alleviate the “oh the transaction didn’t go through because someone was on the phone”.

The difficulty is that the encoding used for the provision of voice over IP services can be particularly harsh on the tones used by the terminals. The encoding standards can distort the tones, and silence suppression can eliminate gaps between tones.

When Telstra was selling a fibre-to-the-home solution to developers (this was their Velocity product) they limited it to the residential customers as they wouldn’t support EFTPOS or fax.

Ideally you need to test all the possible configurations, but with six different terminal manufacturers, twelve different acquirers and a host of potential retail service providers in between there is an incredibly large number of combinations.

There are some ways around the fundamental issues, but the real solution is to use the international security standards for IP. Many newer terminals will support these standards but not all.

Ultimately it is the acquirer for the retailer who needs to ensure the service is ready to migrate but this just adds another potential service complication.

NBN Co claims to have “identified and scoped a range of existing legacy services” and to be working through migration scenarios with RSPs. The question really is whether RSPs alone need to be involved in migration and whether Telstra is the only company who needs the Government’s R&D funds for replacement technologies.

What other services do you expect will be affected by the decommissioning of copper?