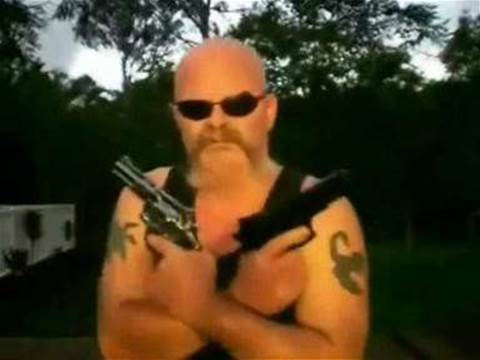 Queensland IT repairman Pete Finn claims to have been spared a defamation suit after getting into hot water over the posting of an inflammatory YouTube video which took aim at a Queensland Hotel.

Finn runs Noosaville-based Pete's PC Repairs by day, but is more known around the world by 22,000 subscribers to his YouTube channel, Fat Aussie Barstard [sic].

Finn was threatened with defamation action earlier this week after posting a negative review of a Brisbane hotel on YouTube.

The review, recorded under Finn's online alter ego Fat Aussie Barstard (sic), criticised South Bank's Plough Inn for what Finn described as poor service during a gathering at the establishment, organised in conjunction with Google-owned YouTube.

Finn learned that the proprietor of the hotel planned to sue him for defamation via an article in The Sunday Mail.

Finn took the video down after 24-hours online.

He said today that he most certainly used some explosive language in the review – accusing the hotel staff of being a "pack of c***'s", among other expletives. But Finn said his online character is "deliberately rude, crude and politically incorrect".

"The last time I checked, calling someone a bad name isn't illegal," he said.

Within hours of posting a response to the threat of defamation on YouTube, Finn was approached by mainstream media outlets such as A Current Affair and publications from the United States, Japan and Canada.

"Had [The Plough Hotel] had a win in the courts, it would have had a huge impact on social media in Australia – on free speech," Finn said.

It would also impact YouTube users around the world, he said.

"If people start getting sued for videos on YouTube, Google would have to change their community guidelines."

He claims that journalists from A Current Affair have since informed Finn that the litigation has been dropped.

"I don't think [the hotel] realised the power of YouTube," Finn said.

A spokesman for the Plough Inn said it would be making no comment after repeatedly being misquoted by the press.

The controversy appears to be paying off for Finn – who aside from his computer repair business, profits from merchandising. He sells t-shirts, underwear and other merchandise stamped with Fat Aussie Barstard's image and provocative slogans such as "We're full!" on a map of Australia.

He also said that as part of YouTube's partnership program, he has been earning a few hundred dollars a month – and in October alone took a cheque for over $4,000.

His December earnings are sure to make for a Merry Christmas.