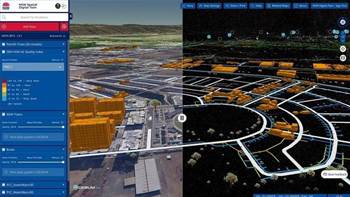 The NSW government has taken the first steps towards extending its spatial digital twin across the entire state after completing a proof-of-concept focused on Western Sydney last year.

The spatial services arm of the Department of Customer Service, NSW Spatial Services, has revealed it is in the process of developing a business case to enable the planned state-wide implementation.

It comes just months after an independent inquiry into the catastrophic Black Summer bushfires last year recommended the government “accelerate” the build to support firefighting.

The report found the platform could help the NSW Rural Fire Service to locate and protect critical assets like telecommunications towers and other utility infrastructure in remote areas.

The three-dimensional data over time (aka 4D) model is a virtual representation of infrastructure such as buildings, strata plans, terrain, property boundaries and utilities, and can also be overlaid with live feeds of real-time data.

With “customers are increasingly reliant on 3D data with temporal capabilities (4D)”, Spatial Services is looking to build out the digital twin developed in partnership with Data61 and has begun developing the business case.

It notes that doing so will require “a complete restructure of Spatial Services' spatial data holdings and the systems that support their maintenance and delivery to a broad range of customers”.

Spatial Services has already engaged Ernst & Young to develop the two business case development components, including one covering imagery and elevation, which are slated for completion in June 2021.

However, it is now looking for a provider – or consortia of providers – to deliver the four technical components of the business case to extend the “proof-of-concept to beta implementation level”.

The work will build on initial stakeholder engagement, also conducted by Ernst & Young, which was used to “identify and prioritise user requirements” for each of the four technical work steams.

A request for proposal released this week reveals that one of the work steams will develop a “simple, rapid and repeatable imagery processing pipeline” for imagery and elevation data.

In its initial report, E&Y identified that the “procurement of imagery and elevation data across NSW government and the economy is ad-hoc”.

Another of the work steams will see the “development of simple, efficient and effective self-service delivery channels for all spatial data and services that form part of the [digital twin]”.

The remaining two streams are focused on automating the infrastructure asset data pipeline to reduce manual data input for utilities like telcos, as well as government and other industries.

Spatial Services plans to use the proof-of-concept to “provide much of the learnings and cost-benefit analysis necessary for a successful business case to extend [it] to cover the whole of NSW”.

"This MVP [minimum viable product] will be maintained and provide much of the learnings and cost benefit analysis necessary for a successful business case to extend the MVP to cover the whole of NSW,” it said.