Inside the GPT Group's six-star office 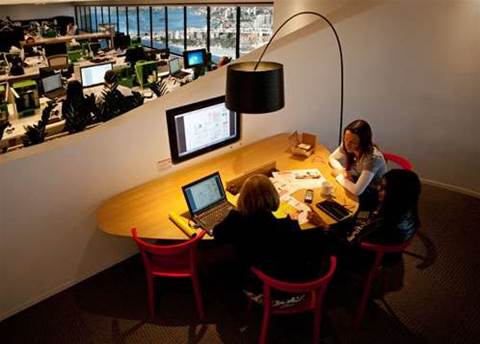 When GPT Group officially launched its refurbished three-storey office in Sydney’s CBD this week, 15 percent of employees were left without a desk.

In accordance with increasingly popular activity-based working plans, the group’s 320 employees shared 272 workstations, which each housed a 21-inch monitor and docking station for laptops.

All employees were issued with Lenovo ThinkPads and Apple iPhones, replacing a mixed fleet of Lenovo laptop and desktop PCs and BlackBerry devices.

Staff could access the GPT environment remotely by logging into a Juniper virtual private network. Since June, only 77 percent of office workstations were occupied at any time, GPT found.

Chief information officer Ross Miller said the change was sparked by a need to improve culture, collaboration and to address ten years of underinvestment in IT.

“This is not an uncommon problem in businesses,” he noted. “We were in the Stone Age four years ago; the workplace was actually exacerbating silos [in the business and IT].”

The new GPT was a Microsoft shop that used an SAP enterprise resource planning system instead of a complex, industry-specific CTI software system that required knowledge that GPT no longer had.

Miller said few staff used wired network connection ports at each workstation, but he was “not brave enough” to do away with network cables for now.

A single swipe card granted each user access to the building, their locker, and printers – of which there were only nine instead of the previous 27.

Documents were stored on a newly deployed SharePoint server to improve collaboration and ensure work was not lost along with any lost or stolen devices.

GPT was in the process of appointing a ‘knowledge manager’ who would perform quarterly audits to ensure that documents were stored on the network.

Miller did not expect security risks to have increased under the new activity-based working plan, since senior executives – who were typically responsible for the most sensitive documents – had always used mobile devices.

IT staff ran proof-of-concept trials and pilots prior to procuring and implementing any new technology.

According to the self-described “risk-averse” CIO, the most risky part of the project was deploying Windows 7 and Office 2010, which were difficult to integrate with GPT’s legacy applications.

The change management program also included a “biggest loser” campaign for reducing use of paper.

GPT has halved its paper use and energy costs in the new office, supporting its aim to achieve a six-star energy rating.

Energy reductions were due, in large part, to the migration of some 140 virtual servers and 160TB of in-house storage to Global Switch’s co-location facility in Pyrmont.

The in-house data centre had a power usage efficiency (PUE) rating of 11, Miller said, which meant that 91 percent of its power requirements were due to cooling and other overhead.

By contrast, the Global Switch facility had a PUE of 1.74. The data centre migration took place within 12 weeks.

“It was sort of ridiculous, but we did it,” Miller said of moving GPT’s infrastructure from its headquarters in the MLC Centre in Sydney.

While most work was done in-house, GPT contracted integrator Logicalis for its wireless network deployment, Frontline Systems for Windows 7 and Office, Data#3 for unified communications and Peace of Mind Technology for audio and video conferencing.

Miller said GPT was unlikely to allow workers to choose their own smartphones in future, although there was some demand for Android devices.

However, VMware virtual desktop technology was already in place to support future ‘bring your own’ (BYO) computing devices, including iPads, he said.

“[BYO computing] is on our roadmap,” he said. “[But] this is a massive amount of change in one hit.”