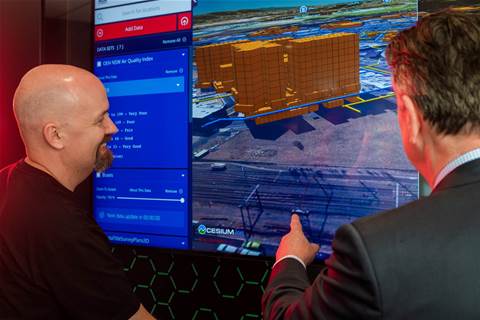 Showing off assets in 4D.

The digital assets can also be combined with live feeds from a variety of internet of things (IOT) enabled sensors to overlay real-time data on traffic flows, air quality, and electricity demand.

The federated platform was developed with Data61, incorporating the CSIRO-spinoff’s open source catalogue technology, MAGDA, to combine data from public agencies and the private sector.

While the web-based platform built on Data61’s TerriaJS platform is freely available to the public, in-built permissioning systems keep some sensitive data locked away for government use.

The first phase of the system digital twin includes visualisations of government areas including the Western Sydney City Deal and Greater Parramatta to the Olympic Peninsula.

Geospatial web systems group leader at Data61, Mats Henrikson, said the new capability represents a “step change” in how environments and the processes taking place inside of them are visualised.

“Till now decision makers have referred to property boundaries in 2D,” Henrikson said in a statement.

“Having them available in 3D together with how they have changed over time, and being able to easily share this with other related data makes it much easier to fully understand the context of the boundaries.

"Cities have never been so data rich as a result of connected sensors and many are growing vertically in addition to horizontally. This creates incredible opportunities to overlay 3D/4D data from satellite and drone technologies which is spatially accurate, to show the bigger picture of what's happening above and below the ground over time.”

Henrikson also highlighted the possibilities for developers and engineering firms to more fully understand subterranean infrastructure before works commence or to visualise the potential impacts of future infrastructure.

Construction giant Lendlease has already jumped at the opportunity and has collaborated with the NSW government to share data on cities and buildings.

The ASX-listed firm has also launched its own digital twin offering that offers physics modelling to simulate how land can be developed and building performance under a range of environmental conditions - something that Lendlease said could be combined with sustainability initiatives to inform material selection for new projects.

Meanwhile, Google (who tapped Lendlease to redevelop its Bay Area sites to the tune of $21 billion) and parent company Alphabet have faced mounting backlash over its smart city projects in Toronto under the banner of the Sidewalk Labs subsidiary which leverages many of the same technologies that enable or plug into digital twins.

If successful, however, digital twins and smart cities could be another cash cow for Alphabet, Lendlease and other players in that space - a report from AlphaBeta Advisors commissioned by Data61 estimates data-driven urban management could be worth $5-10 billion in the Asia-Pacific region by 2028.

The same technologies can also help unlock value in older assets such as NSW Spatial Service’s $60 million archive of historical aerial imagery, which is being turned into a 3D maps showing how Sydney and other key locations in the rest of the state have looked since the 1940s.