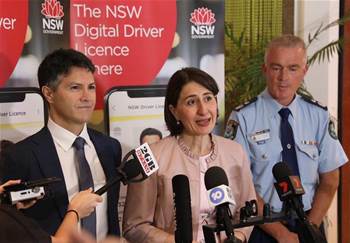 NSW citizens have enthusiastically embraced the government’s digital driver’s licence, with more than 600,000 people creating a digital pass in the first week.

The opt-in digital licence immediately struggled under the load, with many people unable to create a licence via the Service NSW app in the hours after it launched.

This was despite the government’s pushing back the original state-wide launch date due to stability issues with the underlying IT platform.

But it is now apparent why the app initially strained under the load, with government revealing that more than half a million people have downloaded the digital licence in almost a week.

Only around 23,000 of these were downloaded during trials of the digital pass in Dubbo, Sydney’s Eastern Suburbs and Albury, which began in late 2017.

“More than 550,000 people have already downloaded the digital licence, with 97 per cent giving it the thumbs up,” Berejiklian said.

Dominello updated that figure on Monday morning, putting the total number of downloads at “over 600,000 in less than a week”.

He said this represented “over 10 percent” of NSW motorists, compared with a “3 percent take up in South Australia of their licence in the first 12 months”.

While the digital driver’s licence can now be used for proof of identity, proof of age and roadside police checks, Service NSW has recommended that a physical card still be carried in the early stages.

“We are working closely with business and industry to have them come on board and accept the DDL,” Dominello said.

For the digital licence to be accepted, motorists also have to ensure their phone is charged and tha the screen is not cracked. When undergoing a police check, the phone should not be picked up until requested by an officer.

Citizens are not required to hand their phones to police.

“We’ve always put the customer at the heart of everything we do. Opal cards and Service NSW have revolutionised the customer experience,” Berejiklian said.

“The digital driver’s licence is the latest way we are making life easier for the people of this state.”