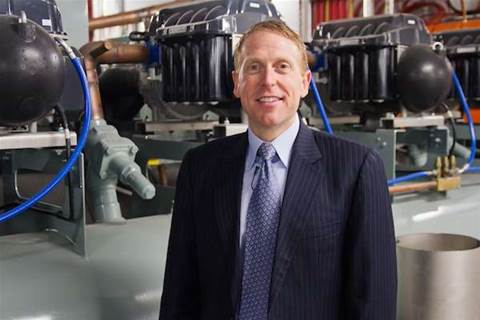 Scroggie reflects on a year of growth.

The first anniversary of Craig Scroggie as NextDC chief coincides with the one-year anniversary of the company's Melbourne data centre, and he says the last 12 months have been a "wild ride".

The group’s Melbourne M1 data centre was opened by then Communications Minister Stephen Conroy on July 4 last year, around the same time Scroggie took the helm of the $458 million company.

The firm's staff gathered last night to celebrate the milestone, no doubt also taking time to mark the departure of founder Bevan Slattery, who yesterday revealed he would step down as non-executive director.

He leaves the company in good hands, with Scroggie’s team rushing to build out the second story of the 17,500 square metre M1 facility, just part of the space needed to serve the unnamed major client it signed last month in a $60 million, five-year deal.

Scroggie would not confirm that client is Microsoft, despite widespread speculation.

“I think enough has been written about it,” he told iTnews.

The company this week sold its share of the Asia Pacific Data Centre Trust to help pay for the build.

“Our footprint at 35 megawatts is still relatively small compared to the entire size of the data centre industry. There are still thousands of enterprise companies operating their own data centres and slowly those companies are saying ‘we don’t want our capital tied up in buildings, we want to get out of those’.”

“I think the industry is diverse. Applications as a service, platform as a service, infrastructure as a service, they all somehow live in a data centre and we don’t compete against any of them.

“We’re the Switzerland of the data centre industry.”

Scroggie said some customers like Australia Post had a good relationship with their telco provider but wanted to contract directly with NextDC.

"Some of our customers can be in the data centre three, four or five times, but they're in there on different services."

In an infrastructure-as-a-service world, Scroggie is mindful of the need for NextDC to differentiate its offering for customers at the front end.

Asked about the move by the Deutsche Borse to enable trading of cloud computing capacity, Scroggie said standardisation was still a challenge.

“The obvious complication in an on-demand computing environment is are you now going to say that that spot market or that commodity is standardised? Because it’s really really hard to say what is the benchmark to ensure the quality is the same.

“Most customers will tell you that it’s something they consume as a commodity service, but there’s a lot of layers, of which that’s only one,” Scroggie said.

“There might be spot trading for oil but it’s not going to deliver the vehicle that moves you around or the components or safety features. There are so many other elements.

“Economically and historically we know that eventually commoditisation means a race to the bottom.”

For now, Scroggie seems confident the hundreds of millions of dollars NextDC is investing in its Australian footprint will give it a head start over any potential competitors.

The company’s Sydney data centre is due to come online in September, followed by Perth in December.

In Melbourne, the finishing touches are being put on a $1.2 million solar array that covers the entire roof of the building.

The panels will provide less than 5 percent of the power used by the facility, but Scroggie said it’s been an exercise in learning for the future.

“What we learn about complementary (power) supply is as important as anything else we do because over time we will start to use more complementary technologies and it may be a combination of those technologies.”

"The chances of the (energy) price going down are near zero but what I've done is taken 5 percent of my load and fixed the price, knowing that in five years the investment will be paid back."